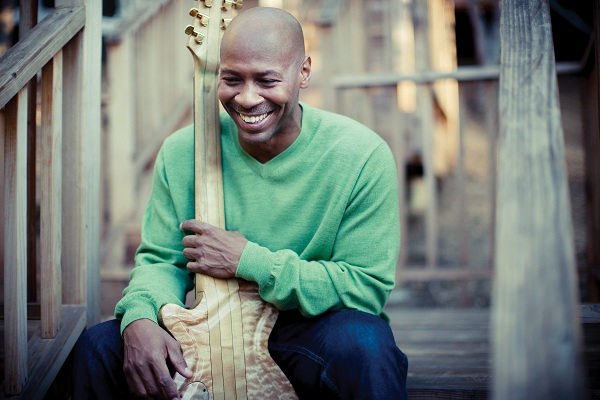 slideshow
The wide variety of music encompassed by the label “jazz" will be on full display this week in St. Louis, with performances of big band swing, cabaret, free improv, Gypsy jazz, ragtime, and numerous other sub-genres and allied musics happening at local venues.

Here's a look at some of the most noteworthy shows coming up...

Guitarist Kevin Eubanks and his trio begin a four-night stand at Jazz at the Bistro. Since leaving his steady gig on television, the former Tonight Show bandleader has done work for some educational and charitable causes; toured on his own and with bassist Dave Holland; and made several recordings for Mack Avenue Records, the most recent of which was a duet album with fellow guitarist Stanley Jordan that came out earlier this year.

For more about what Eubanks (pictured, top left) has been up to recently, check out the interview he did back in April with the Voice of America program Beyond Category.

The Jazz at Holmes series at Washington University will present a tribute to the music of Ornette Coleman featuring saxophonist Dave Stone, while the Gaslight Cabaret Festival resumes with singer and impressionist Dean Christopher performing “Everybody Loves Somebody Sometime: A Tribute to Dean Martin" at the Gaslight Theater.

Organized by singer Eve Seltzer and guitarist Ben Wood of the band Franglais, the first-ever St. Louis Gypsy Jazz Festival begins the first of three days and nights of performances at Evangeline's.

The event will include three evening shows followed by late-night jam sessions, plus brunch-time shows on Saturday and Sunday. In addition to Franglais (pictured, center left) the lineup features St. Louis' own Coco Rico, plus visiting acts including accordionist Dallas Vietty, singer Miles Griffith, and the bands Swing '39 and Bedlam Swing. You can see videos of all the participating acts in this post from last Saturday.

Also on Friday, Minnesota's Davina & The Vagabonds will bring their swinging jump blues to the Old Rock House; Ken Haller performs his cabaret show “Mama's Boy" at the Gaslight Theater; and the Gateway City Big Band plays for dancers at the Casa Loma Ballroom.

Meanwhile, singer Banu Gibson will be back in town for the first time since 2010 to perform a matinee program of music from singer-songwriter Randy Newman at the Sheldon Concert Hall.

Then that evening, singer Lina Koutrakos and pianist and singer Rick Jensen will wrap up the Gaslight Cabaret Festival's weekend with their show “Two For The Road" at the Gaslight Theater.

The music department at Webster University will present its annual TKT Scholarship Benefit at Winfred Moore Auditorium on the Webster campus. The event raises money for scholarships awarded in the names of Terry Jackson, Kirk Cappello and Tony Saputo, three former Webster students who died in the 1991 plane crash that :killed eight members of country singer Reba McIntyre's band.

This year's theme is “Jazz Interpretations of Pop Hits of the 1960s," as performed by members of the jazz faculty, the Webster University jazz Singers, and guest vocalists.

The Luminary presents “Change is a Sound: Free Jazz and Collective Practice in Political Movements," an event featuring a conversation between percussionist Charles “Bobo" Shaw, a founding member of the Black Artists Group, and St. Louis University's Ben Looker, who wrote The Point From Which Creation Begins, a book about the history of BAG. KDHX's Josh Weinstein will spin BAG-related recordings before and after.