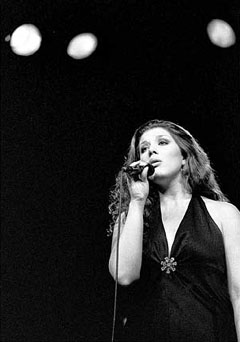 Jane Monheit, one of today's most eminent jazz vocalists, performs this summer at the Tanglewood Jazz Festival; Mateusz Kolakowski is a frequent guest artist at The Knitting Factory, the Montreux Festival and other major stages, and his CD was released this year by Jazz Forum; the rising tap dance team of DeWitt Fleming and Jared Grimes have been guest artists with the Lincoln Center Jazz Orchestra, tap festivals and Off-Broadway shows; jazz pianist/composer Ted Rosenthal, winner of the Thelonius Monk International Piano Competition and performer with Wynton Marsalis, Gerry Mulligan, Art Farmer and Jon Faddis, will present the New York instrumental premiere of his jazz quintet “SwingFlight." the piece was first performed last March with the Nilas Martin Dancers at Manhattan's DiCapo Opera Theater. After the first few weeks of the Usdan season, onstage performances begin by students of the many programs at the Center, including its Jazz Ensemble and new Vocal Jazz department. The Usdan Center Jazz program was created by Dr. Billy Taylor in 1986, and Dr. Taylor also played a rare public performance last summer to open the Usdan Center 40th Anniversary Season.

Usdan Center for the Creative and Performing Arts, America's largest summer arts day camp, was formed to introduce young people, ages 6 to 18, to the arts through performance and study with a professional faculty of artist-teachers. The Center's mission is to provide children with the arts as a companion for life through great teaching, and the camaraderie of fellow students who share a love the arts. Usdan offers more than 40 programs in music, dance, theatre, visual arts, media arts, chess, creative writing, and nature and ecology. No audition is required for most Usdan programs, and one-third of the Center's 1,600 students receive tuition assistance to study at Usdan. Children commute to the Center every weekday for seven weeks each summer, traveling on on air-conditioned buses that leave from most New York metropolitan-area neighborhoods. A special feature of the students' daily program is the Center's series of Festival Concerts, daily educational performances by distinguished artists, such as the Tokyo String Quartet, James Galway, Canadian Brass, jazz legends Jimmy Heath and Billy Taylor, the Limon Dance Company, and cast members of current Broadway shows. Although the Center's goal is to encourage participation in the arts, Usdan's unique program has also inspired many former students to go on to professional careers. Alumni include actors Natalie Portman, Lisa Gay Hamilton (featured in August Wilson's Gem of the Ocean on Broadway) and Jordan Leeds (I Love You, You're Perfect, Now Change), Tony Award-winning playwright Michele Lowe, singers Mariah Carey and Jane Monheit, and members of the New York Philharmonic, Philadelphia Orchestra, San Francisco Symphony, and numerous ballet companies including Pacific Northwest, Ballet San Jose, American Ballet Theatre and New York City Ballet. Usdan Center is an agency of UJA-Federation of New York