SOURCE: ALL ABOUT JAZZ PUBLICITY
July 29, 2009
Sign in to view read count 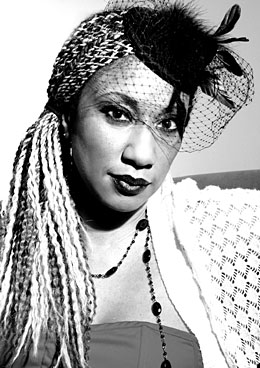 slideshow
“With her honey-tone vocals, insightful, personal lyrics, savvy original songs and intelligent choice of covers, she effortlessly mixes jazz, soul, pop and funk... one of the UK's finest singers in any genre." --TIME OUT

Acclaimed jazz singer & songwriter, Juliet Kelly, tours her own brand of “glam jazz" around the UK to promote her new album, Licorice Kiss. Juliet has supported the likes of Take 6 and Georgie Fame and performed with Courtney Pine, Talvin Singh and Carleen Anderson. With recent sell-out shows in Russia, Germany and Greece and an upcoming slot at this year's London Jazz Festival, Juliet is taking the jazz scene by storm with her sophisticated, accessible jazz.

Sophisticated but never complicated. Intelligent but never intellectual. Juliets sound perfectly encapsulates the glamour of the jazz divas of a bygone age with a modern, sassy twist. Its been described as a cross between Grace Jones and Peggy Lee with a hint of Amy Winehouse but Juliet calls it sophisticated music for stylish people - Glam Jazz!

Becoming a jazz singer seemed an unlikely prospect for Juliet who grew up in London in a strict, religious household. In fact, all music apart from the religious variety was completely banned! Whilst studying for a degree in economics, Juliet discovered her natural talent for singing at a local music workshop. She had never sung in public before but it wasn't long before she was completely hooked.

Within a year she had auditioned for and been accepted on to the postgraduate jazz course at London's prestigious Guildhall School of Music and Drama. Since then, Juliet has worked with many outstanding musicians and performed in venues around the UK as well as in Ireland, Italy, Germany, Israel and Australia.

Juliet recorded her debut album Aphrodites Child (33 Records) in 2003. It featured Juliets original songs and garnered excellent reviews from critics in the UK and the US as well as widespread radio airplay. A successful UK tour followed with sell-out and capacity audiences at venues across the country. Her songwriting ability has also been widely praised and she took honours in the jazz category of the 2004 International Songwriting Competition.

In 2005, Juliet performed with top UK jazz saxophonist Courtney Pine in a live broadcast for BBC4s Jazz Britannia season at the Barbican. This was followed by two successful sell-out concerts in Russia and her debut US performance that took place at New Yorks Sweet Rhythm jazz club.

Juliets second album, Delicious Chemistry (Chantiko), further showcased her talents for writing laid-back, accessible jazz. The album which was released at the end of 2005 - featured her regular band that included Mercury award-winning drummer Seb Rochford and a guest appearance from Courtney Pine. Juliet also appeared as a guest vocalist on Courtney Pines album Resistance in the same year.

In 2006 Juliet opened for the Grammy-award winning vocal group Take 6 as part of the London Jazz Festival at the Barbican and saw demand for her accessible jazz spread overseas leading to more sell-out shows in Germany, Greece and Russia.

Licorice Kiss (Purple Stiletto) was released in May 2009 and is Juliets third album. Referencing influences as diverse as Soul II Soul, the Eurythmics and Soft Cell, she offers up her own take on some 80s classics alongside her own creations that range from toe-tapping grooves to latin-inflected ballads.