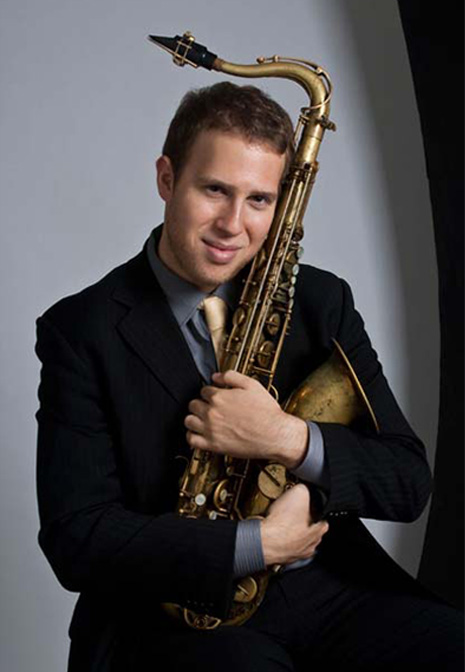 “David has such a great sound! He knows the history of jazz, and he can really swing. I know that he'll become one of the most successful saxophonists of his generation." —Tim Ries, Jazz Educator/Composer and Rolling Stones' Saxophonist

Innovative and gifted saxophonist/composer, David Rubel has just announced his upcoming SPRING 2015 MINI-TOUR, and a LIVE recording that will take place over three evenings on MARCH 5th, 6th & 7th in Toronto. David and his excellent ensemble (which performed so brilliantly on Rubel's 2013 recording, Into the Dark) features Winston Matsushita on piano, Malcolm Connor on bass and Robin Claxton on drums. The group will be joined on the Tour and for the LIVE recording at Toronto's premiere jazz venue, JAZZ BISTRO by David's very special guest, the dynamic and exciting London, UK-based vibraphonist, NAT STEELE. David Rubel and his Quintet are thrilled to be recording their new CD at JAZZ BISTRO - the same fantastic club where they launched their successful and highly regarded 2013 independent debut CD, Into the Dark. The new LIVE Quintet CD will be released internationally in early 2016.

TOUR DATES WILL INCLUDE

FOR THOSE ATTENDING THE LIVE RECORDING, Jazz Bistro is located at 251 Victoria Street in downtown Toronto. Nouvelle gourmet cuisine is served from 7:30 PM and the performance begins at 9:00 PM. There will be a $15 Music Charge. For dinner/table reservations (highly recommended), please call 416-363-5299.

For Media Accommodations for any of the tour venues and JAZZ BISTRO, please contact LMC Media by phone at 416-486-6742. For further information, please go to jazzbistro.ca.

“If David Rubel were in the film business and not jazz he'd be a screenwriter. Into The Dark, the debut CD from the saxophonist born and raisedin Toronto, is alive with phrases that rise, fall and answer one another. As it goes, you can almost imagine words appearing in thought bubbles over the musicians' heads, and Rubel is generous this way, letting everyone in the quartet have a say and the time to say it in." -Peter Goddard of The Toronto Star

Toronto-born Jazz saxophonist David Rubel is an alumnus of both the Humber College and University of Toronto Jazz programs. His rich sound and versatile brand of Jazz has been featured in literally all of Toronto's major jazz venues from “The Rex Jazz & Blues Bar" and the legendary “Montreal Bistro", to “The Old Mill" and the new “Jazz Bistro". Rubel considers himself fortunate to have studied with jazz legends Dave Liebman (Miles Davis and Elvin Jones), Pat LaBarbera ("The Buddy Rich Band") and jazz educator/composer/saxophonist (and multi-Juno winner) Mike Murley. David has toured throughout Europe, the United States and Canada, and has performed with Grammy and Juno winners such as Maria Schneider, Kurt Elling, Donny McCaslin, Dave Liebman, Don Thompson, Kirk MacDonald, Tim Ries and many others. David can be heard as a soloist and sideman on numerous Canadian recordings, and his music has also appeared in various short films and web series. David Rubel was thrilled to release his 2013 debut CD as a leader, for which he was awarded Grants from The Ontario Arts Council and The Canadian Music Fund (FACTOR) in relation to the production and release of Into the Dark.

David and his talented ensemble's upcoming release - tentatively titled Vibin' With the David Rubel Quintet, will be recorded over three nights, and released in Canada and internationally in early 2016. Rubel is excited to collaborate on this new recording project with vibraphone prodigy Nat Steele, of London, UK. Since his arrival on the scene, Steele has quickly gained a reputation as a cutting-edge virtuoso. Following in the giant footsteps of Milt Jackson, Victor Feldman and Cal Tjader, his playing is lyrical, melodic and harmonically adventurous, with a focus on hard-driving swing. Steele's own quartet is regularly featured on the “Late, Late Show" at London's world-famous temple of jazz, “Ronnie Scott's Jazz Club", and he has recently been a guest with Wynton Marsalis and Joe Locke. Leading up to the recording, the group will undertake a mini-tour throughout Eastern Canada, and their repertoire will draw equally from the Great American Songbook and Bebop eras of Jazz, culminating in an album of Classic Jazz inspired by Cole Porter, Richard Rodgers, Thelonius Monk and Charles Mingus.