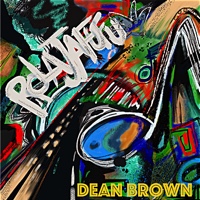 slideshow
Guitarist and composer Dean Brown has always done things his way. Nowhere is that in greater evidence than on ROLAJAFUFU, his fifth album as a leader. The title is a playful acronym that encompasses rock-latin- jazz-funk-fusion, the universes Brown explores on this diverse, kinetic recording. Brown’s fiercely independent streak is also exemplified by the fact that this album was funded by his denizens of fans worldwide via PledgeMusic.

It’s Brown’s first self-released album, after four celebrated previous discs on the ESC label. He initially embarked on a successful solo career in 2001 after establishing himself as one of the most versatile, first-call virtuoso guitarists in the jazz, rock and funk worlds. Just a few of the global icons he’s worked with include Marcus Miller, The Brecker Brothers, Billy Cobham, David Sanborn, Bob James, George Duke, Roberta Flack, Lenny White, and Joe Zawinul. His collective experience playing with these legends is mirrored in the ambitious nature of ROLAJAFUFU.