SOURCE: ALL ABOUT JAZZ PUBLICITY
May 26, 2009
Sign in to view read count 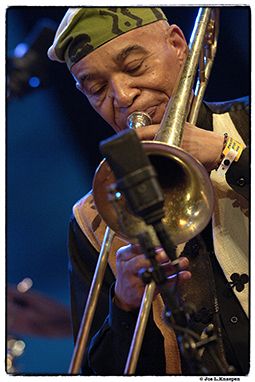 slideshow
Ever wonder what happens in a day in the life of a pioneer jazz master, who's worked alongside some of the top names in music history, including famed band leaders Count Basie, Lionel Hampton, Duke Ellington and countless other legends of jazz and American popular music such as Dizzy Gillespie, Quincy Jones, Aretha Franklin, Sarah Vaughn, Frank Sinatra and Ella Fitzgerald in a career spanning several decades?

Recently dubbed a “Trombone Treasure" by Jazz Improv NY and his latest musical offering described as “absolutely first class all the way" by AllAboutJazz.com, the recognized jazz master is calling on the jazz community at-large to meet the call in rallying for jazz unification and accessibility for all interested in jazz!

As a renowned trombonist turned band leader/composer/producer and educator, as well as jazz advocate and recent Twitter convert; Powell is using his influence to affirm an emergent aspect of this new communicative method by bridging any perceived generational divide with each new tweet.

Want to know how he continues to sustain a productive, professional life long after leaving behind the lengthy, multi-city touring schedule of a big band he once kept? The respected veteran jazz performer was also one of the first black musicians to break the color barrier for TV show bands during his long tenure with the Merv Griffin Show in Los Angeles, as well as within the orchestras of leading Broadway shows in which he played extended stints in New York theater.

The insight he received as a result of prominent musical collaborations with many of the notable household names listed above, on now famous recordings, are only a part of the significant reserves of musical know-how and knowledge of present-day jazz circles Powell and his colleagues can potentially contribute to the Twitter platform.

With every post serving as a conduit between noted icons of the classic Swing, Be Bop and Big Band era to contemporary musicians and up-and-comers on the modern jazz scene, Powell is fostering accessibility using this popular form of social networking.

Many jazz lovers and enthusiasts would not otherwise have the opportunity to connect with a jazz musician of Powell's stature or experience outside of an event venue or classroom at the New School University, where he teaches ensemble performance.

Fellow jazz luminaries such as Frank Wess, Randy Weston, Hank Jones, Frank Foster and other recognized contemporaries and friends of Powell have much more in common--via a shared love of jazz--with today's generation of jazz musicians than apparent differences beyond a diminutive calendar date.

The reality of a divergent factor, upon which some of a less distinctive age group might fixate, has little or no bearing on the apparent actuality of these artists who continue to actively pursue their chosen craft. Describing himself as “a horn player at heart," Powell asserts the process is the same universally for any working performer plying his trade.

Whether he's promoting his current CD, updating his AAJ web page, uploading his latest video from Jazz legacy Films or prepping for a gig, he has a lot to tweet about for the growing population of Twitter followers nationwide.

In addition to Powell's Jazz Twitter Nation, a new study is also attempting to find out whether people really know what it's like to be a professional musician? Or if musicians themselves even know what their peers think and do?

This survey, being done as part of a doctoral dissertation by a researcher at the University of Pennsylvania, will gather findings about musicians' lives, occupations, attitudes and behaviors. Information collected from the many types of musicians located in diverse geographic areas will be posted at musicianstudy.org.

Here are two opportunities to weigh in as a musician on issues of importance to all musicians. The online survey is easy to take, as nearly all the items are multiple-choice.

There is no personal information required, as survey responses are anonymous. You can visit the University of Pennsylvania to learn more. The study has also been promoted by Downbeat Magazine.

Your participation is greatly appreciated!