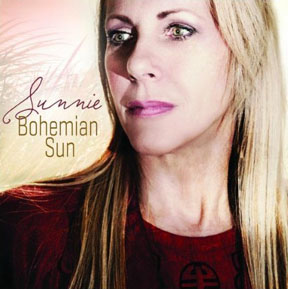 slideshow
Since the beginning of the year, innovative contemporary jazz pianist, songwriter, producer and performer Sunnie Paxson has been methodically moving up the Jazz Week and Smooth Jazz charts with her new album, Bohemian Sun, released on the Roxboro Entertainment label. The CD has been gaining in radio play both domestically and internationally. Currently she ranks 23 on SmoothJazz.com's Radar Chart and 32 on the Jazz Week (February 28) charts as submitted by national radio stations and is moving up the charts week by week.

Voted one of Los Angeles' Best Performers in Los Angeles Magazine, Paxson is know for her driving performances and memorable melodies. In this album she returns to her solid jazz roots with this straight ahead jazz trio record. Joining her on the album, her trio includes no less than Grammy winning bass legend Stanley Clarke and drummer extraordinaire Ronald Bruner, Jr. Special guests on Bohemian Sun are percussionist Munyungo Jackson and soulful vocalist Rod Maurice along with a gospel choir.

Paxson had already achieved significant domestic and international success with her debut solo album, Groove Suite, which contained the feel-good single “Do It ('Til You're Satisfied)," when long time friend Clarke suggested that the time was right for her to record a straight jazz album. Clarke was just starting his own label, Roxboro Entertainment Group, and invited her to be one of four artists to record the label's first albums. Clarke chose to produce Bohemian Sun himself.

“The good part about recording a straight jazz record is that the tracks go down for the most part all at once. Smooth Jazz on the other hand can be very timely and costly. Of course, the catch is that to record a straight jazz album one needs to be at the top of their game in preparation," says Paxson. “I locked myself in my studio practicing non-stop for days and days. All of that preparation paid off!"

Paxson and Clarke's strategy for Bohemian Sun was intentional. They prepared what they considered a “musical menu," comparing it to a multi-course gourmet meal or a set list for a live show. The plan was simple. Start with a great opener that sets the mood, keep the audience intrigued with each entrée, end with the la piece de resistance, a satisfying juicy dessert and throw in a few encores. The album is a sophisticated collection of original songs composed by Paxson, a cut composed by Clarke as well as a couple of standards by Charles Mingus and Herbie Hancock.

That the radio community has picked up on Bohemian Sun is evident with a review by Dr. Brad Stone, music director at San Jose's KSJS-FM, “Sunnie Paxson's new release contains everything that makes an album stand out to me: melodic original compositions mixed in with new takes on some standards, with nimble piano playing, harmonic sophistication, virtuosic accompaniment and gorgeous arrangements. An early candidate for “Record of the Year" in 2012! I'm drawn into this record more every time I spin it!"

“From the opening notes of Bohemian Sun, I had a feeling that this was going to be an enjoyable listening experience and my ears did not disappoint me. The recording not only showcases her piano playing at the highest level but also puts her compositional skills on display...you have one of 2012's top jazz recordings thus far," states Eric Cohen, music director at WAER 88.3 in Syracuse , NY.

A native of Philadelphia, Paxon was a child piano prodigy from a musical family. She attended Berklee College of Music and the Philadelphia College of Performing Arts. In the past she has toured with Stanley Clarke and shared the stage with Justo Almario, Larry Carlton, Danny Gottlieb and Michael Paulo among others. Her compositions and performances can be heard in feature films and television including the ABC-TV hit “Desperate Housewives."

Paxson is currently performing domestically to promote her new album. In March she will be hosting CD Release parties in Melbourne, Fl presented by WGRV Groove Smooth Jazz and in Orlando, FL presented by the Grand Bohemian Hotel. Sunnie will be a featured performer at the popular Winter Park Side Walk Art Festival in Winter Park, Fl and in Los Angeles, CA at the Vibrato Jazz Club.

“Writing, producing, arranging and performing are all facets of the art of music that I love. My ultimate goal is to make people feel good," sums up Paxson. She takes the joys and the heartbreaks of life and transforms them into songs of expression of the human condition&#151a gift in the jazz genre, which is unique and refreshing.

This story appears courtesy of .
Copyright © 2020. All rights reserved.