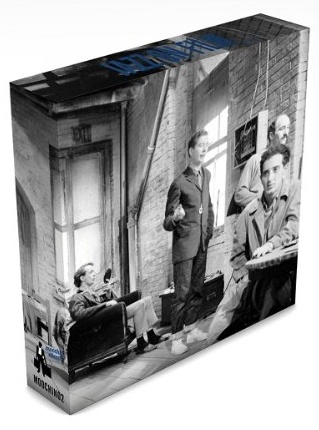 Beat Square & Cool—the 2nd box set in the Jazz on Film series following last year’s Film Noir—is not just a collection containing some of the greatest jazz-inspired film scores ever recorded, but it also tells the story of how jazz (mostly drawing from the bebop that was one of the defining American subcultural and artistic moments of the post-war era)became the soundtrack to key 'outsider' movies from the first wave of youth rebellion, teen angst and the emerging Beat Generation. Now gathered together for the first time, here are 8 remastered film scores on five discs in an exclusively designed, deluxe box set put together by specialist compilation CD producer Jason Lee Lazell and jazz critic/soundtrack expert Selwyn Harris, who has compiled and annotated the set.

All original scores have been enhanced by very high quality, professional jazz-specialist digital remastering surpassing that of any previous CD releases for the scores. The box set includes a colourful 60-page booklet with extensive, in-depth sleeve notes by writer Selwyn Harris (an extension of his regular Jazz on Film column in Jazzwise), plus a foreword by the Jazzwise editor Jon Newey.

“These collections are unprecedented in presentation and sound quality,” —The Observer, November 2012

Released on the Moochin’ about label, Beat Square & Cool kicks off with the first significant teen rebel movie, that of Leith Stevens’ score to biker exploitation flick The Wild One (featuring adaptations by west coast trumpeter Shorty Rogers) followed by another, Franz Waxman’s explosive symphonic-jazz suite for Crime in the Streets. Hollywood began shooting movies in the new bohemia: the San Francisco-set The Subterraneans based on the book by Jack Kerouac featured the cool bop of composer-pianist Andre Previn alongside various 1950’s cool jazz stars. The Paris Left Bank was the setting for Marcel Carne's lesser-known French proto-mod film Les Tricheurs with a score by a Norman Granz JATP swing-to-bop supergroup (Stan Getz, Coleman Hawkins, Oscar Peterson and Dizzy Gillespie among them), and also for Paris Blues, Duke Ellington’s 2nd major film score. Beatnik Barbara Graham is the doomed femme fatale in I Want to Live! with Johnny Mandel’s catchy themes played by baritone legend Gerry Mulligan among other west coast luminaries. The set ends on the brink of the 1960s with a pair of torchbearers for a new generation of independent new wave American filmmakers. The highly influential director John Cassavetes’ Shadows, has some great themes (with one original soundtrack recording) written originally for the movie by Charles Mingus, while Shirley Clarke’s realist doc-feature The Connection has Freddie Redd’s classic Blue Note quartet featuring the great saxophonist Jackie McLean.

Available direct from moochinabout.com and all good record and online retail stores.