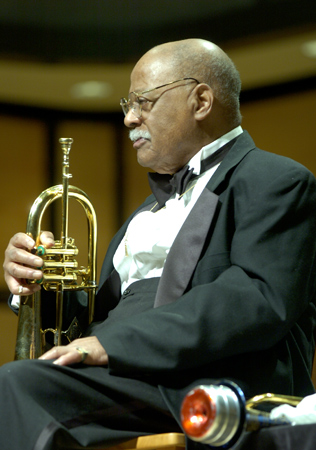 slideshow
Longtime jazz musician and educator Clark Terry has died. He was 94.

Al Hicks, director of the documentary about Clark's life, Keep on Keepin' On, told The Hollywood Reporter on Saturday. He had been in failing health for several years due to advanced diabetes and entered hospice earlier this month, Billboard reported.

On Feb. 11, Terry's Facebook page informed followers of his declining health and transition into hospice care. “It is with a heavy heart we share that our beloved Clark Terry is now in hospice care. Gwen and the health care team are making sure that Clark is as comfortable as possible. During this time the family is asking for your prayers."

A native of St. Louis, Terry rose to fame as a sideman for two legends of swing/big band music, first performing with Count Basie between 1948-1951 and then Duke Ellington from 1951-1959. Terry held the distinction of being one of few who played in both bands.