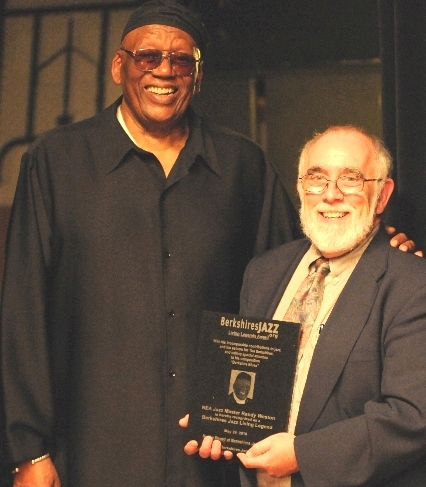 After a “meet the media" panel, which preceded Weston's concert in Pittsfield on May 29, 2010, Berkshires Jazz President Edward Bride presented the pianist with an engraved granite plaque, commemorating the event. “With his incomparable contributions to jazz, and his esteem for The Berkshires - and calling special attention to his composition 'Berkshire Blues' - the Board of Directors acknowledges Randy's impact with our first Berkshires Jazz Living Legend award," said Bride.

After nearly a 10-year absence, the NEA Jazz Master returned to the place of his discovery, The Berkshires, for a career retrospective that will included an open panel discussion and a concert featuring his African Rhythms Duo, with Alex Blake on bass.

Weston's story is the stuff of legend. Employed as a young cook in Lenox, Massachusetts, he would often walk over to the renowned jazz resort/retreat called Music Inn, where he would play the piano after hours. Proprietress Stephanie Barber, who hired him as a dishwasher, discovered his pianistic skills and encouraged the young Brooklynite to pursue a career in music. And, pursue he did. With a jazz résumé that spans some 60 years, Weston has dozens of recordings and compositions to his name.

As a budding professional jazz artist, and later as an accomplished world traveler and performer, Weston frequently stayed in the Berkshires for rest and creative inspiration. Acknowledging The Berkshires' special place in his heart, his most famous composition, one that has become a jazz standard, is called “Berkshire Blues." His compositions have been recorded by many renowned pianists, from Ahmad Jamal to George Shearing, and many more.

In addition to being named a Living Legend, Weston's awards and distinctions are many, and were capped in 2001 with his designation as Jazz Master by the National Endowment for the Arts. In 2006, he was awarded an honorary Doctorate of Music from Brooklyn College, and in 2009 he was named to the ASCAP Jazz Wall of Fame. His autobiography will be published this September by Duke University Press.

On the afternoon of the concert, he participated in a media panel chaired by the notable jazz writer Willard Jenkins, who collaborated with Weston on his forthcoming autobiography, African Rhythms. Panelists included Milton Bass, the Berkshire Eagle writer who wrote the first review of a Randy Weston concert; Seth Rogovoy, editor of the award-winning Berkshire Living magazine; and Jeremy Yudkin, musicologist and historian, author of The Lenox School of Jazz and other books.

The concert was presented with the support of the Aaron Copland Fund for Music, The High Meadow Foundation, and the Greylock Federal Credit Union.

Berkshires Jazz, Inc. is a non-profit 501(c)3 organization, established in 2009 to present jazz events and promote jazz education throughout Berkshire County in western Massachusetts. The organization is also the sponsor of the Pittsfield CityJazz Festival. Information at www.BerkshiresJazz.org.