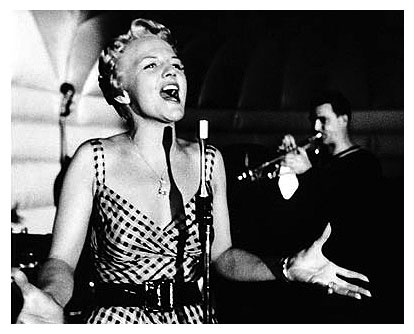 slideshow
(May 18, 2012 - Wimbledon, ND) World-renowned jazz legend Miss Peggy Lee is being memorialized by her childhood hometown of Wimbledon, North Dakota with a permanent installation of photos, music and memorabilia from her unparalleled career at the transportation depot where she lived a number of years as a child. The exhibition will be dedicated at a Grand Opening ceremony attended by Lee's grandchildren on Saturday, May 26, which would have been the singer's 92nd birthday.

When Lee was a child, her father was the depot agent of the train station that has since been restored as The Midland Continental Depot Transportation Museum in Wimbledon. Lee and her family lived in quarters above the station that have now been transformed into a showcase of classic photos, costumes, correspondence and memorabilia from a career that spanned six decades and garnered critical acclaim and countless awards, including a Grammy for the 1969 hit, “Is That All There Is?" Lee also received a Grammy lifetime achievement award, and in 1999 was inducted into the Songwriters Hall of Fame.

“We are thrilled that Wimbledon is honoring our grandmother with this beautiful tribute," said Holly Foster Wells who is the singer's granddaughter and vice president of Peggy Lee Associates, LLC. “Even though she ended up in Los Angeles, my grandmother always considered North Dakota her home and she was proud of those roots. This is a great way for fans to connect with her legacy, and we know she'd be delighted to be remembered in this way."

On Saturday, May 26, the Midland Continental Depot Transportation Museum will host a Grand Opening ceremony following years of renovation to the facility, including the installation of the Peggy Lee exhibit. This all-day event will feature a drum and bugle corps performance, picnic on grounds, a dedication ceremony and more. All Midland Museum events are free to the public.

Also as part of the Lee's birthday weekend celebration, there will be two tribute concerts featuring performances by nationally acclaimed jazz artists Stacy Sullivan, Jon Weber and Steve Doyle. “A Tribute to Miss Peggy Lee" will be performed at the Reiland Fine Arts Center on May 25th at 7:30 p.m. The show will also be performed on May 26th at the Stage at Island Park in Fargo (at 7:00 p.m.).

Sullivan has been performing her critically acclaimed tribute show to packed audiences in New York and Los Angeles. This will mark her North Dakota debut.