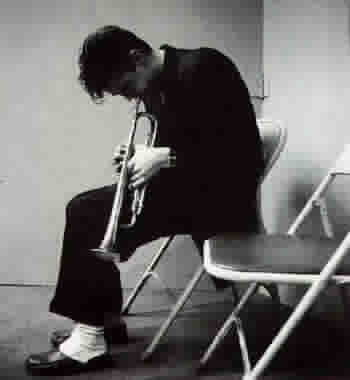 slideshow
Norway&#151Considered the holy grail of Chet Baker recordings by many collectors around the world, the new CD released by Norway's Hot Club Records titled TELEMARK BLUE features Chet Baker's last studio sessions, in Paris February 1988, just three months before his untimely death. It was his first jazz & poetry album, and a remarkable meeting between two great poets. The sessions feature a collaboration between Baker and renown Norwegian poet Jan Erik Vold, and includes guitar legend Philip Catherine. The initiative came from Jan Erik Vold, who's been working with leading jazz musicians since the late sixties, reading his poetry along with Jan Garbarek's early groups, and later with pianist Egil Kapstad, bringing in Swedish tenorists like Nisse Sandstöm and Bernt Rosengren, as well as Americans like bassist Red Mitchell and guitarist Doug Raney.

Chesney Henry “Chet" Baker, Jr. (December 23, 1929-May 13, 1988) was an American jazz trumpeter, flugelhorn player and singer. Baker established a large following, based in part on his matinee idol beauty, emotionally remote performances, and well publicized drug habit. He died in 1988 after falling from a second-story window of a hotel in Amsterdam, Netherlands. Baker's earliest notable professional gigs were with saxophonist Vido Musso's band, and also with tenor saxophonist Stan Getz, though he earned much more notoriety in 1951 when he performed a series of West Coast engagements with Charlie Parker. In 1952, Baker joined the Gerry Mulligan Quartet, who's version of “My Funny Valentine," featuring a memorable Baker solo, was a major hit, and became a song with which Baker was closely associated. The Quartet lasted less than a year because of Mulligan's arrest and imprisonment on drug charges. In 1953, Pacific Jazz released Chet Baker Sings, a record that increased his profile but alienated traditional jazz fans; he would continue to sing throughout his career. Baker formed quartets with Russ Freeman in 1953-54 with bassists Carson Smith, Joe Mondragon, and Jimmy Bond and drummers Shelly Mann, Larry Bunker, and Bob Neel. In 1954 Chet Baker won the Downbeat Jazz Poll. Because of his chiseled features, Hollywood studios approached Baker and he made his acting debut in the film Hell's Horizon, released in the fall of 1955. He declined an offer of a studio contract, preferring life on the road as a musician. Over the next few years, Baker fronted his own combos, including a 1955 quintet featuring Francy Boland, where Baker combined playing trumpet and singing. Baker's 1956 recording, released for the first time in its entirety in 1989 as The Route, with Art Pepper helped further the West Coast jazz sound and became a staple of cool jazz. Baker continued to record and perform throughout the '60s, '70s and 1980s. He died in 1988 after falling from a second-story window of a hotel in Amsterdam, Netherlands.

JAN ERIK VOLD, born 1939 in Oslo, is a prominent Norwegian writer, having published 20 books of poetry, as well as numerous publications of literary essays, biographies and editorial works. In his youth he was a jazz journalist. He translated the American poets William Carlos Williams and Wallace Stevens, Robert Creeley and Frank O'Hara, Richard Brautigan and Bob Dylan. His own poetry has been widely translated, also into English. Twelve Meditations (2004) is out in a bilingual edition at Gyldendal's, Oslo. For his literary achievements he received an Honorary Doctorate at the University of Oslo 2000. As a jazz & poetry performer, Jan Erik Vold has been constantly active for more than forty years, since his first album Briskeby Blues was produced. With Jan Garbarek he made three albums 1969�, and with Egil Kapstad eight albums 1986�. Love, Rain (1974) is a radio play based on the poetry of Robert Creeley. Rainy Day Women (1977) is a translation of 70 Bob Dylan songs, which resulted in the Dylan song album Stones. Rains (1981), in cooperation with blues guitarist Kåre Virud. The Day Lady Died (1986) is an album featuring the poems of Frank O'Hara. Storytellers (1998) brings international poetry by Rimbaud, D. H. Lawrence, Paul Celan, Ekelöf, Szymborska. Enclosed is Jan Erik Vold's liner notes on Chet Baker.