The rush of motifs and intricacy of line he brought to ["Horizon Ahead"] pointed to a musician who, remarkably, still plays as if he has something to prove. Or, more specifically, as if to remind listeners that he maintains control of his instrument and never lacks for air power.— Howard Reich, Chicago Tribune 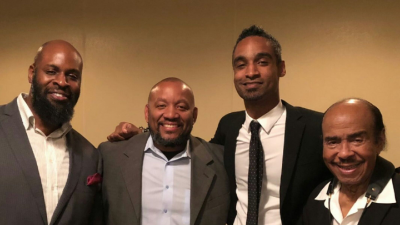 slideshow
Internationally-acclaimed bebop/hard bop saxophonist, composer, and educator Benny Golson, who will turn 90 years old in January 2019, will appear at Baltimore’s Jazzway 6004 on Saturday, September 15, 2018 at 8:00 p.m. The NEA Jazz Master and newly-inducted member of the DownBeat Hall of Fame will perform his famous tunes such as “Killer Joe,” “Whisper Not,” “I Remember Clifford,” and “Stablemates” in an intimate setting for one night only.

Mr. Golson is one of only two remaining jazz greats from the famous 1958 photo portraying 57 notable jazz musicians, known as “Great Day in Harlem.” (Sonny Rollins is the other.) Golson is known for co-founding and co-leading The Jazztet with trumpeter Art Farmer in 1959, and he played in the world-famous bands of Benny Goodman, Dizzy Gillespie, Lionel Hampton, Earl Bostic, and Art Blakey. He has recorded over 30 albums in the U.S. and Europe under his own name and innumerable albums with other greats. In reviewing Golson’s 2016 album, Horizon Ahead, All About Jazz reviewer Jack Bowers says, “If time has dulled Golson's razor-sharp mind or degraded his admirable technique, it's certainly not apparent on Horizon Ahead, on which Golson is in total command of a much-more-youthful rhythm section.” A prodigious composer, Golson has written well over 300 compositions. Many have become jazz standards still being recorded all over the world. He has composed and arranged music for a long list of jazz greats, including Count Basie, John Coltrane, Miles Davis, Sammy Davis Jr., Ella Fitzgerald, Dizzy Gillespie, Benny Goodman, Lionel Hampton, Shirley Horn, Quincy Jones, Peggy Lee, Carmen McRae and Oscar Peterson. He has written scores for hit TV series and films such as M*A*S*H, Mannix, Mission Impossible, Mod Squad, The Partridge Family, The Academy Awards and television specials for ABC, CBS and NBC as well as the BBC in London and Copenhagen.

Golson's musical odyssey has taken him around the world. In 1987 he was sent by the U.S. State Department on a cultural tour of Southeast Asia, New Zealand, Indonesia, Malaysia, Burma and Singapore. Philip Morris International sent him on an assignment to Bangkok to write music for the Bangkok Symphony Orchestra.

In 1995 Golson received the NEA Jazz Masters Award of the National Endowment for the Arts. In 1996, the Jazz Studies Program of his alma mater, Howard University, created a prestigious award in his honor called the “Benny Golson Jazz Master Award." In November 2009, he was inducted into the International Academy of Jazz Hall of Fame at the University of Pittsburgh.

During this trip to Charm City, Golson will lead a symposium and master class at the Peabody Institute of Johns Hopkins University on September 14. Students will have heard Golson’s music and know his name. Says Peabody jazz studies professor Alex Brown, “It will be an incredible opportunity for the students (and faculty) to have him in town! Jazz history is part of Peabody’s jazz curriculum, and I’m sure students are well aware of Golson’s importance.”

Born in Connecticut and residing in New York, pianist Sharp Radway plays throughout the U.S. and abroad and heads several groups of his own. Besides Golson, he has worked with jazz luminaries Yusef Lateef, Red Holloway Peewee Ellis, Slide Hampton, Diane Schuur, Nicholas Payton, Eddie Henderson and Randy Brecker. He is music director, pianist, and arranger for The Celebration of Lionel Hampton Big Band and The New York City Ska Orchestra.

Baltimore born and raised, bassist Kris Funn is the son of noted trombonist Charles Funn. After graduating from Howard University with an honors degree in computer science, he pursued a career as a professional jazz musician. By age 23 he was touring internationally with alto saxophonist Kenny Garrett. He has since traveled to every major jazz festival in the world, touching six continents, performing with the likes of Sean Jones, Benny Golson, Bruce Williams, Nicholas Payton, Warren Wolf, Pharoah Sanders, Jeff Majors, Jeff Lorber, Christian Scott aTunde Adjuah and Kamasi Washington. He appears on several recordings with Christian Scott aTunde Adjuah and recently released his debut album, Cornerstore. He is on the Peabody jazz faculty.

The concert at Jazzway 6004 will give jazz fans the opportunity to enjoy a living legend backed by a top-flight band in a cozy and cordial atmosphere. Named by DownBeat Magazine as one of the leading House Concert venues in the United States, the popular jazz venue is a 501(c) 3 arts organization in operation for over a decade. Concerts are hosted by founders Marianne Matheny-Katz and Howard Katz in a large home on a hill with ample free parking on the street.

In addition to great music, guests will be treated to soft drinks, a raffle entry and a buffet with fruit, cheese, appetizers and dessert post-concert. Tickets are $60, and all tickets must be purchased in advance from the website. The telephone is 410-952-4528. The address is 6004 Hollins Avenue, Baltimore, MD. MD 212210. Tickets are available now and are expected to sell out quickly.