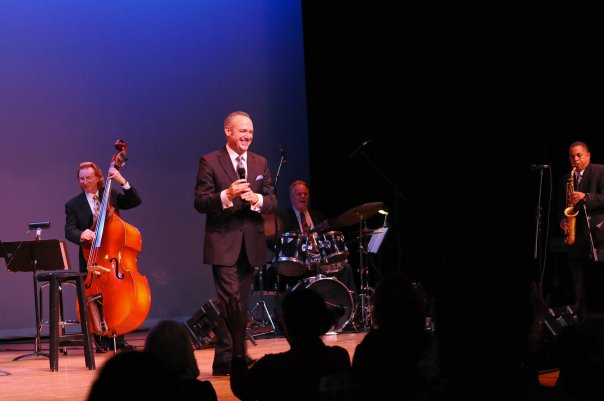 slideshow
SAN ANTONIO, TX - The number-one male jazz singer in the home of the Alamo has been entertaining South Texas audiences and recording critically acclaimed CDs for more than 23 years.

The show will be recorded live and a CD of the performance should be released in time for Christmas.

New York area cabaret and jazz aficionados will have a chance for a “sneak peek" when the singer performs a number at Jim Caruso's Cast Party at Birdland on Monday, October 28, at 9:30 p.m.

A consummate showman with a smooth baritone voice, engaging personality and a deep love and respect for the Great American Songbook, Slavin is an “old school" classic jazz vocalist who has racked up numerous awards and glowing reviews across the country and overseas.

Long before the current crop of young interpreters of the golden era of American popular music embarked on their careers, Slavin was working the microphone deep in the heart of Texas - in the culturally diverse and vibrant city of San Antonio - now the nation's seventh largest.

He was born in New London, Connecticut, and lived in the Tri-State area (Greenwich, Newark and Staten Island) as a boy before his military father's career took him to many other states south, east and west. And while he has become firmly entrenched as a Texas favorite, because of his East Coast roots, he regards his upcoming Manhattan debut as a homecoming.

“It's very much like going home," Slavin says. “I am beyond excited to have this opportunity to sing in a city I have loved all of my life. It's a dream come true!"

Fans and reviewers often compare him to a younger Tony Bennett, Johnny Hartman or Mel Torme. One newspaper writer dubbed him “Mr. Tuxedo Voice.” Texas Monthly says he’s one of the “Swing Set” in the Lone Star State. In reality, his voice, persona and performance style put him in a category all his own.

Slavin's unique interpretations of jazz, pop and Spanish language classics and his charismatic stage presence have made him the top male jazz vocalist in South Texas - popular everywhere from the “country club set" and sophisticated nightspots to jazz festivals and college campuses. He also has appeared as far north as Anchorage, Alaska and as far south as Mexico City.

His classy and fresh approach to the Great American Songbook has earned him the honor of opening for such jazz legends as The Four Freshmen, Eddie Palmieri, Dee Dee Bridgewater, David Sanborn and Chico Hamilton; performing in concert with the internationally acclaimed Jim Cullum Jazz Band (famous for its National Public Radio program, “Riverwalk, Live From The Landing”); and giving private performances for Grammy Award winners Helen Reddy and Vikki Carr.   His CDs are programmed on many traditional and internet radio stations in the USA and Europe.  His most recent recording, “I'll Take Romance," has been spotlighted on programs from Alaska to New York and as far away as the United Kingdom, Italy, Poland, New Zealand, Portugal, France and Mexico - and is currently programmed on the “Singers and Swing" channel of Music Choice, cable TV's digital music service headquartered in New York City.

In 2011 he was invited to appear on BBC London's popular program, “Late Night with Joanne Good." That same year, after being discovered on You Tube by Diane Linden Thomas, producer of the internet radio program “A Visit With Connie Francis" (which streams every week on Baltimore Net Radio), Slavin was invited to guest-host four of the broadcasts - which he researched and scripted himself. It was a definite thrill for the crooner, who is a lifelong fan of Connie's music.

Last year, the San Antonio Art & Jazz Festival presented Slavin with the “Lifetime Achievement Award" for his musical contributions to the community - most notably for a six-year series of concerts and a special CD he produced to benefit the San Antonio AIDS Foundation.

ABOUT THE METROPOLITAN ROOM

Voted the number-one jazz cabaret club by New York Magazine, The Metropolitan Room is one of the most critically acclaimed venues in New York City and is known as the “home" for big name talents and rising stars.

The Metropolitan Room is located in the heart of Manhattan in the Flatiron/Chelsea District at 34 W. 22nd Street.

A high-end cabaret and jazz club, The Metropolitan Room brings the best in live music to New York City every night of the week at 7p.m., 9:30 p.m. and 11:30 p.m.  Fabulous award- winning Broadway, TV, film and radio performers take the stage in an intimate 115-seat atmosphere reminiscent of the golden age of cabaret.

“Stunning . . . and his appearance matches his voice - it's quality . . . Wonderful! . . . the perfect punctuation point to an enjoyable evening."  —JOANNE GOOD, HOST OF “LATE NIGHT WITH JOANNE GOOD" ON BBC LONDON

“Jazz and cabaret singer Ken Slavin has what it takes to make hearts melt: a deep baritone voice that fills the room and a sincere approach to lyrics that reach out tenderly with genuine passion. . . Slavin feels as comfortable with Brazilian romance as he does with Duke Ellington, Cole Porter, Jimmy Van Heusen, and Harold Arlen: honoring a timeless songbook that will never be forgotten." —JIM SANTELLA, CADENCE MAGAZINE

“When it comes to crooning in the classic jazz/pop tradition, Ken Slavin has no peers." —SAN ANTONIO EXPRESS-NEWS

“During an era when male jazz singers are few and far between, a new recording by Ken Slavin is a welcome event...Based in San Antonio, (he) has become established as arguably the city’s top jazz crooner or saloon singer.” —SCOTT YANOW, LOS ANGELES JAZZ SCENE

“I heard Ken stop the room...literally one of the most difficult rooms to stop in New York City and perhaps the entire world. This crowd never asks for encores, but they asked for two from Ken that night. I'll never forget it.” &#151CLINT BROWNFIELD, travel journalist, New York City

“Slavin is making inroads in the worldwide music scene...a remarkable talent — a voice that has been variously described as 'velvety,' 'sultry,' 'clear,' and 'rich' — combined with his showmanship, have gained notice as far away as France and Portugal. Slavin says he is a Texas performer looking to break out. The way he's going, it won't be too long before his wish comes true." —SCENE IN SA MONTHLY

“Ken Slavin’s got some pipes and he knows how to use them. Attend a show and you are likely to fall in love – not only with his sultry voice, but also with that mile-wide, boyish grin and those handsome good looks. Slavin is funny, charming and works hard to ensure the entire audience has a great time.” —MISI WOOLARD, “ART & SOUL,” NORTH SAN ANTONIO TIMES

“A sultry, late-night ode to love, ‘I’ll Take Romance’ is a seductive 16-song collection that features both the lushest texture (particularly with the string-laden bookends “Thoughts of Your Smile” and “I’ll Take Romance”) and the most intimate, casual vibe ever heard on a Slavin album...More than most contemporary interpreters of the Great American Songbook, Slavin delights in turning his material sideways, making even the most familiar tunes sound like new discoveries...” —GILBERT GARCIA, MUSIC EDITOR, SAN ANTONIO CURRENT