The series marks the debut of live performances presented by Jazz Alive, a charitable foundation based in Talbot County, Maryland, at the historic Waterfowl Building’s Festival Hall. Located at 40 South Harrison Street, Easton, Maryland, the popular venue serves as the headquarters for the Waterfowl Festival held annually in November.
—Jazz Alive 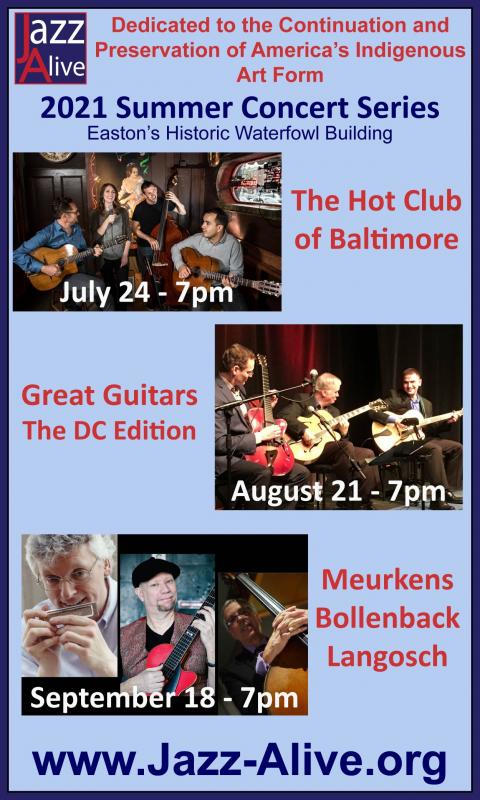 slideshow
Three jazz concerts in a club-like setting, featuring respected performers from the region and New York City’s jazz scene, will fill the historic Waterfowl Building in Easton, Maryland with music this summer. The series marks the debut of live performances presented by Jazz Alive, a charitable foundation based in Talbot County, Maryland, at the historic Waterfowl Building’s Festival Hall. Located at 40 South Harrison Street, Easton, Maryland, the popular venue serves as the headquarters for the Waterfowl Festival held annually in November.

The series continues August 21 with Great Guitars: The DC Edition. Following in the tradition of such great jazz guitarists as Charlie Byrd, Herb Ellis and Barney Kessel, jazz guitar prodigy Jan Knutson will team up with two DC guitar greats, Steve Abshire and Steve Herberman for a night of tunes from the Great American Songbook, popular jazz standards and favorites from the Latin jazz repertoire.

Jazz harmonica virtuoso Hendrik Meurkens, along with guitarist Paul Bollenback and bassist Paul Langosch, offer a finale to the series on September 18. Hailed as “one of the world’s leading exponents of the jazz harmonica” by JazzTimes Magazine, Hendrik Meurkens has been described as “Brazilian samba swing with Toots Thielemans’ virtuosity”. Meurkens’ 24 CDs have established his immediately recognizable style of Brazilian Jazz, earning him praise from critics—who awarded him the Brazilian International Press Award—and fans who have listed him repeatedly in readers’ polls in Downbeat and Jazziz magazines.

All concerts begin at 7 p.m. Tickets are $35 for adults and $15 for students and are available at jazz-alive.org or at the door the day of the event. A cash bar and light hors d’oeuvres will be available for purchase. Proceeds from ticket and concession sales support Jazz Alive’s mission of providing educational support in developing future artists and preserving this great art form through school and community programs.