Jazz Child: A Portrait Of Sheila Jordan Biography By Ellen Johnson Released By Rowman And Littlefield 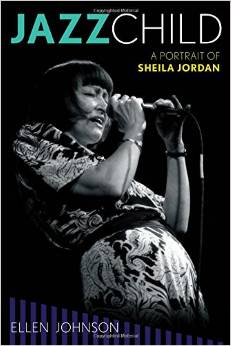 slideshow
When Sheila Jordan dropped a nickel in the jukebox of a Detroit diner in the 1940s and heard “Now’s The Time” by Charlie Parker, she was instantly hooked—and so began a seventy-year jazz journey. With Jordan’s full cooperation, author Ellen Johnson documents the fascinating career of the 85-year-old NEA Jazz Master who stands today as one of the worlds most deeply respected jazz vocalists and educators. Jazz Child: A Portrait of Sheila Jordan published by Rowman and Littlefield is the first complete biography about this remarkable singer’s life with a personal and touching foreword by Don Heckman, former Los Angeles Times Jazz Critic and current editor for The International Review of Music.

According to Howard Mandel, author and president of the Jazz Journalists Association, “Ellen Johnson's portrait of Sheila Jordan captures the warmth, modesty, determination and sublime creativity of a unique woman who's become a jazz master and American cultural hero. We read about a golden age of jazz in Detroit and New York City; interracial friendships and romances; abuse, addiction and recovery, motherhood and triumph—all in the service of illuminating a life of beautiful music.” Johnson reveals within the book the challenges Jordan confronted, from her growing up poor in a Pennsylvania coal mining town to her rise as a bebop singer in Detroit and New York City during the 1950s to her work as a recording artist and performer under the influence of such jazz giants as Charlie Parker, George Russell, Lennie Tristano, Charles Mingus, Sonny Rollins, and Thelonious Monk. As The New York Times announced, “Her ballad performances are simply beyond the emotional and expressive capabilities of most other vocalists.”

Johnson spent more than six years interviewing friends, family and jazz luminaries. “It was important to Sheila that her story be told from the perspective of a woman,” said Johnson, “and also as a jazz vocalist and educator I could convey a point of view that was essential to her story. This book is an inspiration to anyone who is confronting struggles or dealing with insurmountable challenges, and proof that dreams can be achieved at all walks of life.” Johnson has over thirty years combined experience as a professional musician, educator, writer, publicist, songwriter and lyricist. She currently teaches at the California Jazz Conservatory Jazzschool in Berkeley.

For jazz fans, Jordan’s biography is a testament to a vanishing generation of musicians and the importance of her indomitable spirit in keeping the music alive. As the prominent jazz saxophonist Sonny Rollins commented, “It’s about time that somebody wrote a book about Sheila Jordan. People need to hear something real that’s going to make a difference in their life. This is a message that the world needs.”

Jazz Child: A Portrait of Sheila Jordan is available through Amazon or from Rowman and Littlefield Publishing Group.