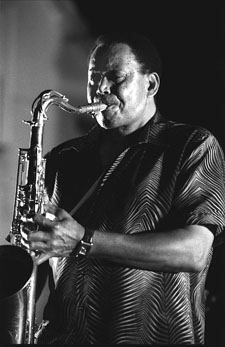 Saxophonist Odean Pope, after integrating several musical influences during his youth in Philadelphia such as the church choir, jazz and R&B of the 50's and classical woodwind chamber music, helped form Catalyst in the 1970s, a jazz fusion band of musicians (including Tyrone Brown and Freddie Green) who were making music way ahead of their time. Even though the band was critically acclaimed then, the music failed to catch on with a wider audience. But, in 1999, a two-CD set was reissued by Muse called “Catalyst: The Funkiest Band You Never Heard" and their musical vision gained a whole new listenership. In 1979, Odean joined the Max Roach Quartet as a regular member for more than two decades. It was with Max Roach that Odean perfected the techniques of circular breathing and multiphonics, both allowing him to stretch his solo improvisations from dazzling elevations to the throbbing, husky sounds for which he is so well known, to all kinds of delicacy in getting from one to the other. Odean won acclaim from Australia to Japan, even winning “Best Tenor Saxophone Player" at the North Sea Jazz Festival. Odean works with his trio, (Lee Smith, Craig McIver) quartet and his famous saxophone choir. The saxophone choir is formatted with nine saxophones, and was established by Odean in 1977 and premiered in 1985 with a Soul Note album called “The Saxophone Shop." The saxophone choir has been the realization of his southern legacy; a medium for creating the richly textured harmonic sound that has permeated his musical soul since childhood. Even though he plays clarinet, oboe, piccolo, flute and piano, Odean feels an affinity for the tenor saxophone because it most closely mimics the human voice. He constructs layers of melodic sound by playing within the fourth system in different tone scales using multiphonics, achieving several pitches together, for which he is well known. The choir reaches a stunning intensity that is simultaneously one voice and is also, as described by Francis Davis, “harmonically engorged."