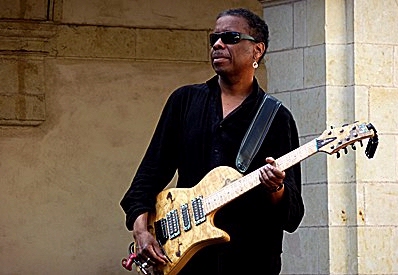 slideshow
Appearing at the Collingswood Community Center, 30 E. Collings Ave, in Collingswood NJ, on May 3rd for the last Jazz Bridge concert of the season will be guitarist Jef Lee Johnson, bassist Chico Huff, and drummer Charles Pateirno. One Show: 7:30-9 p.m.

Jef Lee Johnson is a true American original. Growing up and playing in the church his grandfather built in Germantown (Philadelphia, PA), he plays almost every instrument and is a powerful vocalist with a broad range and sensuous bluesy tone as well. According to Phil DiPietro of All About Jazz, it's on guitar that he burns most incandescent, conjuring jawdroppingly brilliant, careening stylistic collisions of legato-laden fusion, angular outness, and state-of-the-art acid-funk. Johnson has collaborated both touring and recording with such heavyweights as James Carter, Rachelle Ferrell, George Duke, Erkyah Badu and D'Angelo. He's probably the only musician who has worked with McCoy Tyner and Sister Sledge on the same day!

Most in-demand in Europe, Jef Lee Johnson is a prolific creator, putting out numerous projects: Hype Factory, Things Are Things, Monkey Zero, St. Somebody, Laughing Boy and his latest project - Black and Loud - all top sellers for Philly's independent label Dreambox Media. This rare opportunity to see him locally should not be missed!

In a review, JazzTimes said: The dizzyingly talented Jef Lee Johnson plays everything - besides virtuosic guitar abilities and great power-soul vocals, he plays sax, bass, keyboards and more. Johnson uses these skills for creative, but pointed, swampy funk purposes on the epic, two-disc release Hype Factory. As a vocalist, Johnson comes across as a more jaded (or sometimes smart-aleck) Stevie Wonder, matching his cool but ultimately optimistic lyrics...As a guitarist, he's got all the bases covered - from bluesy acoustic and sweet jazz chordings to offbeat countrified licks. These considerable abilities and unique songwriting outlook make Johnson, the artist, a true original.