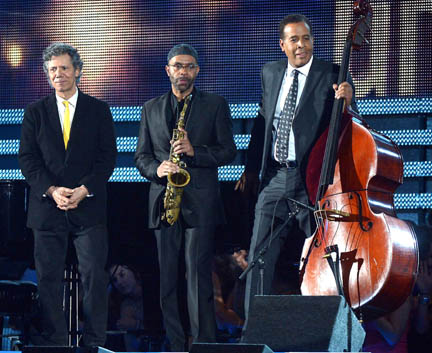 slideshow
Jazz greats Stanley Clarke, Chick Corea and Kenny Garrett performed on the televised CBS broadcast of the 55th Annual Grammy Awards Sunday night, February 10, in a tribute to jazz legend Dave Brubeck. They performed one of Brubeck’s best remembered pieces, “Take Five,” ending with a few bars of his enduring hit, “Blue Rondo a la Turk.” The show was also supported on radio worldwide via Dial Global and covered only at Grammy.com and CBS.com going out to viewers and listeners worldwide.

For many years Jazz, Classical and other musical genres outside of Pop have been delegated to the Grammy Pre-Show, which has only been available as an online broadcast since the advent of video streaming. Clarke is pleased Grammy producers changed it up a bit this year.

“I’m so happy the Grammy Awards decided to include real jazz as a part of this year's televised broadcast. It was an honor to be asked to participate. Actually, I can’t remember the last time jazz was featured on the primetime awards show. I’ve always found this odd, since jazz is one of our authentic American musical art forms,” says Clarke. “This is wonderful for the jazz community.”

The bonus of the evening was being able to acknowledge and pay tribute to the legendary Brubeck. Ironically Clarke, Corea and Garrett are all Grammy Award winners in jazz categories, but though nominated four times, Brubeck never won a Grammy. He was honored, however, with a Grammy Lifetime Achievement Award in 1996.

It is apt that Clarke, Corea and Garrett were asked to perform. All are innovators in the jazz genre and have reached legendary status in their own right. Brubeck, whose career spanned over six decades, was a trendsetter in the progressive jazz movement. He is known for his odd time signatures, improvised counter points and other experimentation that remain hallmarks of innovation. Brubeck passed away in December of last year, one day before his 92nd birthday. His legacy lives on as he continues to be one of the most popular musicians in both the jazz and classical worlds.

“Dave is ‘one of the guys’ in the American Jazz Movement. Beyond being a great pianist, he was a great composer, who was prolific,” observes Clarke. “I've always enjoyed my times with him. He was the nicest guy you could ever meet. He will be truly missed! I’m so glad we were able to expose his contributions and the jazz art form to the millions worldwide.”

Clarke performed once with Brubeck when he was just starting his career. He remembers it well and recollects, “When I was 18, Dave or someone from his management, hired me to sub for his bassist, who couldn't make this gig in some club in Jersey. I was scared to death having to read all his charts! I saw him at a festival we were on together a couple of years ago and we laughed about that gig. It was so cool to play with Joe Morello and Paul Desmond of the Dave Brubeck Quartet. That experience certainly had an impact on me, especially being so young and green."

Composer, arranger, producer, bandleader and performer Stanley Clarke is celebrating forty-plus years as a consummate bass musician. He was the first bass instrumentalist to headline tours and has been sought out by top artists in the industry for numerous projects. He is a composer and arranger of over 60 film and television scores including Boys N the Hood, What’s Love Got to Do With It, Romeo Must Die and The Transporter.

This story appears courtesy of .
Copyright © 2021. All rights reserved.