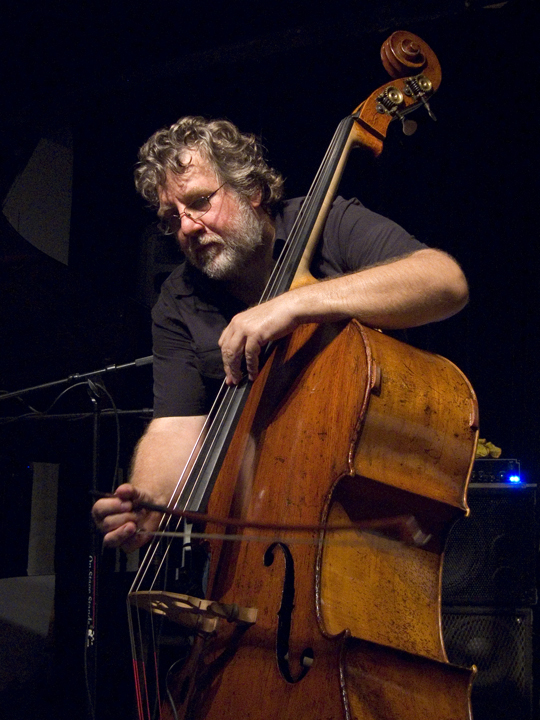 slideshow
Several years ago, Michael Formanek was in the middle of a bass solo during a Bloodcount gig at the Knitting Factory's Old Office in Manhattan. Tim Berne, Chris Speed and Jim Black had all dropped out, leaving the bassist to carry on alone except for a young woman in the audience who was telling her friend a story. The 50-capacity room was tiny enough that everyone including Formanek could hear her go on. Finally, someone from the jazz etiquette police shushed her halfway through the solo, to which Formanek responded: “No, no. Don't stop talking now. It'll throw me off." This elicited laughs from the band and a few chuckles from the crowd.

This self-depreciating humor is a Michael Formanek cornerstone, even leading him to name his last album 'Am I Bothering You?' It's another funny line, but what isn't so funny is that the album came out 12 years ago. Now this longtime first-call bassist returns with 'The Rub and Spare Change,' which features Berne on alto saxophonist, along with pianist Craig Taborn and drummer Gerald Cleaver.

It's a red-hot band of guys who've played together in different configurations for years, so the genesis with this project began simply as old colleagues coming together to play some of Michael's tunes in a casual setting. “Beforehand, I just wasn't necessarily thinking about recording," explains Formanek. “My whole thought process about music at the time was putting these projects together and doing them and then letting them evaporate. Then doing the next one. I was just thinking it was a great band that I wanted to play with. But the second we started playing, it was so obvious that [recording] was what we needed to do."

After years of playing in groups like the Mingus Big Band, Tony Williams (starting at age 18!), Joe Maneri, Joe Henderson, Freddie Hubbard and Stan Getz, as well as with Berne and a slew of downtown jazz luminaries, Formanek took a job in 2003 at the Peabody Conservatory of Music in Baltimore, where he teaches students and directs the Peabody Jazz Orchestra. He released four good albums for the Enja imprint in the '90s that are now out of print, as well as the aforementioned solo disc for Berne's Screwgun label. Then that was it.

“It's a long time," Formanek says of the 12-year gap. “But because I don't come from this world, academia, I really felt that I needed to do what I've done with everything else I've ever been serious about, and that I immerse myself in it for a period of time. I tune a lot of other stuff out as I try to get myself rooted. There was a lot of stuff that I wanted to do that would establish myself in teaching and in the community."

Along with teaching, he collaborated with different people, wrote for a string quartet, and he even composed a piece for the Peabody Orchestra in 2007. He played with friends and toured a little, but because he stopped recording, wasn't playing in high profile bands and moved out of the New York area, he was basically off the map. This isn't to say he has regrets.

“I think that the new record is an incredibly strong one," the bassist points out. “So whatever it took to get to this point of time makes sense to me. For whatever reason, it just kind of worked for me."

More than that, the album should work for a lot of other people, as well. The material is designed by Formanek to push him and the other players. From the suspended-sounding ostinato pattern of opener 'Twenty Three Neo' to the angular bebop of the title cut, Formanek points his players in radically different directions, undoubtedly moving these master musicians in ways that his Peabody students can still only dream of.

“In some ways, I could bring in anything to these guys and it would sound good," Formanek says. “On the other hand, I think the character of some of the pieces definitely bring out some things in those guys that might not occur in free playing. I could have brought in an eight-page chart that's very specific, but that doesn't guarantee a natural and flowing performance. So it's a serious balancing act."

But perhaps the most poignant moment of the album comes at the end of the haunting 'Jack's Last Call.' The title refers to a message left on his answering machine by a friend who suddenly passed away. The tune swirls with ideas from the players before slowly fading away, perhaps illustrating how one slowly lets go as people move on to the next celestial plane. According the composer the fade was unplanned, but just one illustration of the telepathic quality at work here.

Fans will be able to see and hear Formanek's quartet work live in the coming months with dates on the East Coast from Oct 27 through 29, West Coast dates next summer and European dates in between. After that, Formanek is looking forward to his next recording opportunity.

“I don't want to keep doing these gaps because it gets too complicated learning how to do everything again, so I do want to keep some continuity going," he says with a laugh. “Nothing is a done deal, but the short answer is I'm back."