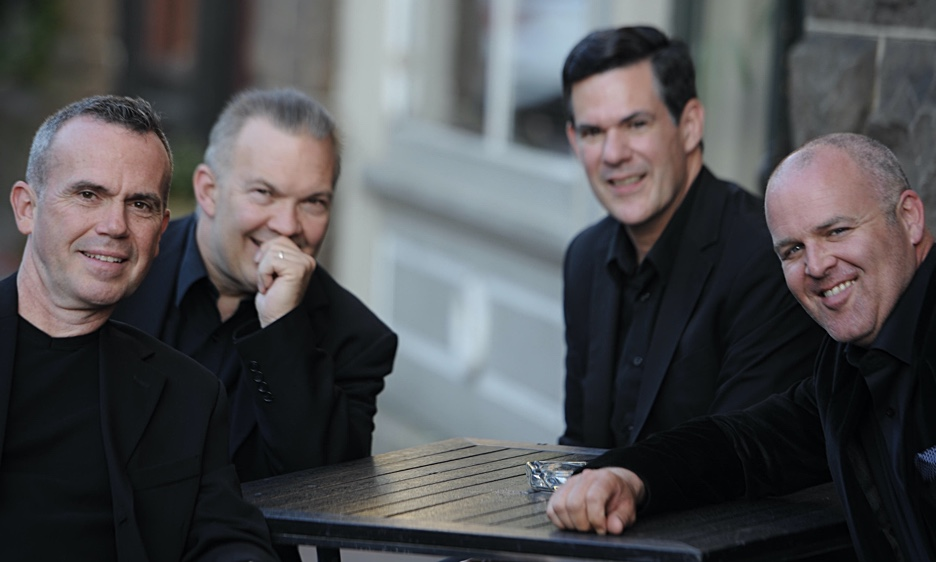 SOURCE: THE PHILLIPS AGENCY
October 29, 2020
Sign in to view read count
On Sunday, November 15 Jazz Beyond Borders marks the one-year anniversary of its supper time world music and jazz concerts held monthly at Café Mezzanotte in Severna Park, Maryland. Listeners will enjoy a concert and a surprise gift to mark the occasion and a new fall menu will be unveiled featuring items from the restaurant’s organic garden.

Originally from Winnipeg, Canada, Phillips grew up on the Magothy River and oversaw Anne Arundel County cultural programs for many years before establishing The Phillips Agency. After presenting and promoting concerts and albums in North America and Europe, she returned from Montreal to Maryland with the goal of bringing cultural events to overlooked areas north of Annapolis, the Maryland State capital. Assistant programmer and jazz vocalist Theresa Sise, suggested Cafe Mezzanotte as a site for a new concert series and preparations ensued. Coming from a Navy Legacy Family, Sise had deep roots and connections to the area.

The partnership demonstrates that in the time of COVID-19, music is a powerful marketing tool, offering tremendous stimulation, entertainment and comfort to listeners with online and in person performances. In the latter format, the mammalian need to congregate and bond with others provides added psychological and physical benefits—when done responsibly! In this case, many appropriately wary patrons returned to a venue they hadn't entered for several months.

The restaurant’s Mediterranean cuisine and 100 seat-room were a perfect match for the diverse musical offerings associated with any Jazz Beyond Borders undertaking. Performances featured artists from Spain, Canada, United Kingdom, Russia and Brazil, as well as the United States. After enjoying many sold-out concerts in early 2020, the series took a three-month hiatus from April – June, resuming in summer with outdoor concerts. It was moved indoors in the fall with social distancing, masks and seating at about 40% capacity for the health and safety of artists, staff and patrons.

The celebratory November 15 concert features the most popular and enduring jazz group performing throughout the Baltimore-Washington- Annapolis triangle. Unified Jazz Ensemble toured for many years before making its auspicious debut appearance in the area at the Annapolis Jazz Festival (then headed by the late legendary guitarist Charlie Byrd). UJE became known as the go to band for solid, straight ahead jazz with distinctive instrumentation, anchoring the jazz community in the way that Joe and Charlie Byrd had in previous decades. Due to the band's modest demeanor, many fans aren’t familiar with the level of individual and collective achievement in the group’s history—they just recognize great jazz when they hear it!

UJE was founded in1992 by graduates of the prestigious jazz program of University of North Texas. Original member Mike Noonan (vibraphone, piano and trombone), was joined by acoustic bassist John Pineda two years later and the two have been stalwart members of the ensemble ever since. As performers and educators, they introduced adults and children to the world of jazz, touring small towns under a grant from the National Endowment for the Arts and introducing school children to jazz under the auspices of Washington Performing Arts and Chamber Music America’s Residency Partnership Program funded by the Doris Duke Charitable Foundation. That said, the group’s bread and butter is providing great jazz for grownups. They’ve performed tens of thousands of concerts. Mid-Atlantic appearances include dates at Blues Alley and The Kennedy Center, Annapolis Jazz Festival, Takoma Park Jazz Fest, Tilghman Island Jazz Fest, Silver Spring Jazz Fest and Wine in the Woods. They have recorded eight albums at this writing.

John Pineda has been a professional bassist since high school days in LaMarque, Texas. After studying at San Jacinto College in Houston and University of North Texas, he moved to the jazz Mecca of Boston. Influenced by virtuosi Charlie Haden, Scott LaFaro and Dave Holland, his solid, in-the-pocket playing style gained him a far-reaching reputation. His sensitivity and earthy groove make him a sought-after player. Since 1994, he has appeared on UJE albums. He has also recorded with legendary drummer Joe Hunt and worked with Eddie Daniels and Steve Davis among others. His bass is maintained by Shank's Strings.

Drummer Frank Russo is a highly skilled and passionate musician and educator. Currently teaching at Towson University, he is also an artist/educator for Sabian Cymbals, Baltimore Drums and Vic Firth. Raised in the NYC area, Russo enjoyed a distinguished career with the prestigious Naval Academy Band, playing with and leading several ensembles. He has performed in jazz festivals in North America, Asia, and Europe with many noteworthy musicians. A Summit Records Recording Artist, his recordings have been praised by national publications such as Downbeat, JazzTimes and Modern Drummer.

Jazz lovers can anticipate hearing some of the best in the business dishing out some of the greatest tunes known to the genre, many of which are heard on their 2019 recording, Standards…Basically. They include titles by beloved composers such as Johnny Mercer, Cole Porter and Henry Mancini. For this concert, well known UJE guest guitarist MIke Pavone will take the spot usually held by UJE trumpeter Tim Stanley. From Waterbury, Connecticut, Mike Pavone grew up playing music with his father, internationally recognized jazz bassist and composer Mario Pavone. He attended Berklee College of Music where he and Mike Noonan met as undergraduate students. He has recorded as a sideman with other jazz artists and also as a leader. He has worked extensively in Boston, Detroit, New York and the in the Baltimore-Washington-Annapolis triangle. Café Mezzanotte is located at 765 Ritchie Highway (Route 2). Just 15 minutes north of Annapolis and 20 minutes south of Baltimore City, the venue offers free and convenient parking. Seatings are at 4:30 PM and 7:00 PM. Concert tickets are available from instantseats.com. For more information, call 410-647-1100.

Now in its fifth year, Jazz Beyond Borders is a cultural diversity project of The Phillips Agency, based in Davidsonville, Maryland. The group brings world music and jazz artists from many countries and cultures to festivals concerts and classrooms in the United States and helps launch albums and tours in North America and Europe. Events include live, streaming and hybrid concerts and workshops.