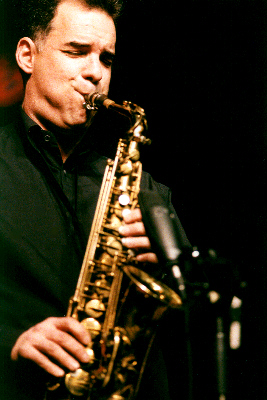 slideshow
Baltimore, MD: The Johns Hopkins University in partnership with the Peabody Institute has launched a new jazz series, Jazz at the Johns Hopkins Club, an exciting concert experience for its alumni, associate members, and guests. The spring series will feature four outstanding concerts beginning with two sets by the Jim Snidero Quartet on February 25th for general and student admissions.

Originally from Camp Springs, MD and hailed as an “alto sax virtuoso" and “master musician" by Downbeat Magazine, Jim Snidero has been a highly-respected bandleader and recording artist for over a quarter century. Snidero gained early recognition as a member of legendary organist Brother Jack McDuff's group, making three recordings with the master. He has recorded and/or performed with some of the most important names in jazz, including the Mingus Big Band, Frank Wess, Eddie Palmieri, Toshiko Akiyoshi, Maria Schneider, and Billy Higgins, as well as Frank Sinatra, Tony Bennett, and Sting. Snidero arrives in Baltimore with the band from his latest release, Interface, featuring Paul Bollenback, guitar; Paul Gill, bass; and McClenty Hunter, drums.

In addition to his performance activities, Snidero has been a major contributor to jazz education as both a best-selling author and educator. The three Jazz Conception (Advance Music) book series he has penned are some of the most widely-used text books in the world, firmly established as a cornerstone of jazz education.

Jazz at the Johns Hopkins Club is a sought after remedy for the lack of venues that consistently present high quality jazz in intimate settings in Baltimore. Ron Daniels, President, Johns Hopkins University and Gary Thomas, Director and Chair of Jazz Studies, Peabody Institute have formed a partnership in their quest to enhance the club's offerings as a state-of-the-art platform for excellent jazz, while reaching a broader, younger membership and community to introduce to jazz and the University.