'Slightly Left of Sorrow's Song' was commissioned by Jazz at Princeton University in honor of the 150th anniversary of W.E.B. DuBois’ birth 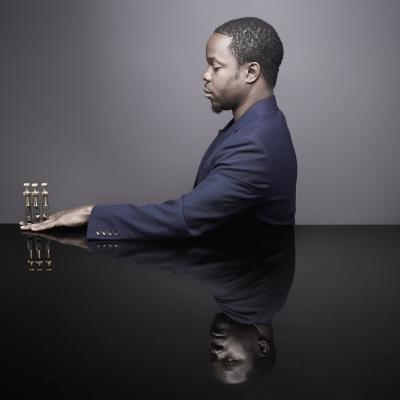 slideshow
Jazz at Princeton University presents guest artist and Blue Note Records trumpeter Ambrose Akinmusire in the world premiere of Slightly Left of Sorrow's Song, commissioned by Jazz at Princeton University to commemorate the 150th anniversary of W.E.B. DuBois' birth. Akinmusire will perform the 8-movement suite with the school's Small Group I under the leadership of saxophonist and program director Rudresh Mahanthappa.

The concert takes place at 8 p.m. on Saturday, November 17 at Richardson Auditorium in Alexander Hall. Tickets are $15, $5 students. For information call 609-258-9220 or visit the website.

Born and raised in Oakland, California, Ambrose Akinmusire, “a thrilling young trumpeter and astute bandleader [with a] unique spark in his playing” (The New Yorker), was a member of the Berkeley High School Jazz Ensemble when he caught the attention of saxophonist Steve Coleman. Akinmusire was asked to join Coleman’s Five Elements, embarking on a European tour when he was just a 19-year-old student at the Manhattan School of Music. After returning to the West Coast to pursue a master’s degree at the University of Southern California, Akinmusire went on to attend the Thelonious Monk Institute of Jazz in Los Angeles, where he studied with Herbie Hancock, Wayne Shorter, and Terence Blanchard. In 2007 he won the prestigious Thelonious Monk International Jazz Competition, decided by a panel of judges that included Blanchard, Quincy Jones, Herb Alpert, Hugh Masekela, Clark Terry, and Roy Hargrove. That year Akinmusire also won the Carmine Caruso International Jazz Trumpet Solo Competition and released his debut album Prelude…To Cora on the Fresh Sound label. He moved back to New York and began performing with artists including Vijay Iyer, Aaron Parks, Esperanza Spalding, and Jason Moran. It was during this time that he first caught the attention of another discerning listener, Bruce Lundvall, President of Blue Note Records. Akinmusire’s Blue Note debut When the Heart Emerges Glistening was released in 2011 to rave reviews. The Los Angeles Times praised his “chameleonic tone that can sigh, flutter or soar,” adding that “Akinmusire sounds less like a rising star than one that was already at great heights and just waiting to be discovered.” DownBeat described his playing as “spectacular and not at all shy—muscular, driving, with a forward sound, pliant phrasing and a penchant for intervallic leaps,” concluding that “clearly something very special and personal is at work here, a vision of jazz that’s bigger than camps, broader and more intellectually restless than blowing sessions.” His new recording is his fourth Blue Note release, Origami Harvest, a groundbreaking work that features the Mivos Quartet, rapper Kool A.D., drummer Marcus Gilmore, pianist Sam Harris, and saxophonist Walter Smith III.

Akinmusire has paradoxically situated himself in both the center and periphery of jazz, most recently emerging in classical and hip hop circles. He’s on a perpetual quest for new paradigms, masterfully weaving inspiration from other genres, arts, and life in general into compositions that are as poetic and graceful as they are bold and unflinching. His unorthodox approach to sound and composition make him a regular on critics polls and have earned him grants and commissions from the Doris Duke Foundation, the MAP Fund, the Kennedy Center, the Berlin Jazz Festival, and Monterey Jazz. Motivated primarily by the spiritual and practical value of art, Akinmusire wants to remove the wall of erudition surrounding his music. He aspires to create richly textured emotional landscapes that tell the stories of the community, record the time, and change the standard. While committed to continuing the lineage of black invention and innovation, he manages to honor tradition without being stifled by it.

About Jazz at Princeton

This year’s exciting programming also features guest artists including world renowned vocalist Nnenna Freelon (February 16, 2019) and Terri Lyne Carrington (May 11, 2019), and the first ever outdoor jazz festival. “With the contribution of so many of jazz's most articulate voices – both as guest artists and ensemble leaders – we are thrilled to offer performances that will engage, inspire and entertain students, educators and the community at large,” says Mahanthappa.

Jazz at Princeton University under the direction of Rudresh Mahanthappa serves to promote this uniquely American music as a contemporary and relevant art form. Our goals are to convey the vast musical and social history of jazz, establish a strong theoretical and stylistic foundation with regard to improvisation and composition, and emphasize the development of individual expression and creativity. Offerings of this program include academic course work, performing ensembles, master classes, private study, and independent projects. They also have the opportunity to participate in academic courses from the music department curriculum that encourage the study of the historical, social, theoretical, stylistic, and creative issues that pertain to the jazz idiom.

Hailed by Pitchfork as “jaw-dropping... one of the finest saxophonists going,” alto saxophonist, composer and educator Rudresh Mahanthappa is widely known as one of the premier voices in jazz of the 21st century. He has over a dozen albums to his credit, including the acclaimed Bird Calls, which topped many critics’ best-of-year lists for 2015 and was hailed by PopMatters as “complex, rhythmically vital, free in spirit while still criss-crossed with mutating structures.” Rudresh has been named alto saxophonist of the year for seven of eight years running in DownBeat Magazine’s International Critics’ Polls (2011-2013, 2015-2018), and for five consecutive years by the Jazz Journalists’ Association (2009-2013) and again in 2016. He won alto saxophonist of the year in the 2015-2017 JazzTimes Magazine Critics’ Polls and was named the Village Voice’s “Best Jazz Artist" in 2015. He has also received the Guggenheim Fellowship and the Doris Duke Performing Artist Award, among other honors, and is currently the Anthony H. P. Lee ’79 Director of Jazz at Princeton University.

Born in Trieste, Italy to Indian émigrés in 1971, Mahanthappa was brought up in Boulder, Colorado and gained proficiency playing everything from current pop to Dixieland. He went on to studies at North Texas, Berklee and DePaul University (as well as the Stanford Jazz Workshop) and came to settle in Chicago. Soon after moving to New York in 1997 he formed his own quartet featuring pianist Vijay Iyer. The band recorded an enduring sequence of albums, Black Water, Mother Tongue and Codebook, each highlighting Mahanthappa’s inventive methodologies and deeply personal approach to composition. He and Iyer also formed the duo Raw Materials.

Mahanthappa has also worked with Jack DeJohnette, Mark Dresser, Danilo Pérez, Arturo O’Farrill’s Afro-Latin Jazz Orchestra, the collaborative trios MSG and Mauger, the co-led quintet Dual Identity with fellow altoist Steve Lehman, and another co-led quintet with fellow altoist and Chicago stalwart Bunky Green (Apex). His exploratory guitar- driven quartets on Samdhi and Gamak featured David Gilmore and Dave “Fuze” Fiuczynski, respectively. In 2015 he was commissioned by Ragamala Dance to create Song of the Jasmine for dancers and a hybrid jazz/South Indian ensemble. He was also commissioned by the PRISM Saxophone Quartet to compose a chamber piece, “I Will Not Apologize for My Tone Tonight,” which can be heard on the quartet’s 2015 double- disc release Heritage/Evolution, Volume 1.

Mahanthappa is a Yamaha artist and uses Vandoren reeds exclusively.