Stephanie has brought this documentary film to fruition to remind jazz fans of what a potent force Chapin was on the '90s jazz scene. --Bill Milkowski, DownBeat 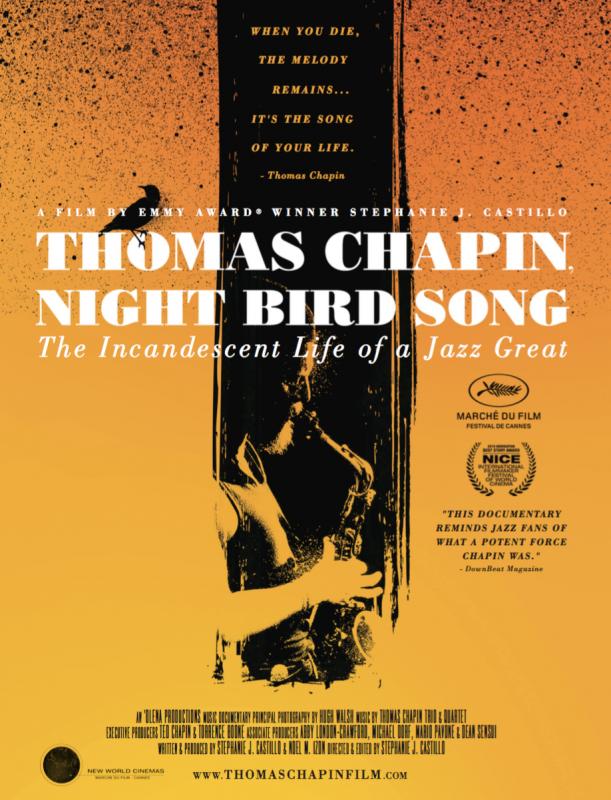 slideshow
Jazz at Lincoln Center will screen the award-winning music documentary Night Bird Song: The Incandescent Life of Thomas Chapin on Friday, March 10th. The free showing will be at 7 p.m. at the Irene Diamond Education Center at the Frederick P. Rose Hall on Broadway at 60th Street, 5th floor (Columbus Circle).

Seating is limited to 160 attendees and will be on a first-come basis. Doors open at 6:15 p.m. The screening will be followed by a Q&A with the filmmaker Stephanie J. Castillo, an EMMY-winning director, and her co-producer/co-writer Noel M. Izon, also a veteran documentary filmmaker.

The event marks a full year of U.S. and international screenings of the film and celebrates Thomas Chapin’s 60th birthday anniversary (March 9). He died from leukemia in 1998 at age 40.

Jazz at Lincoln Center’s education director Seton Hawkins invited Castillo to show her all-new 96-minute version of the film after adult students taking courses at the center asked to see more documentaries that would expand their knowledge of jazz history. Castillo’s original cut of Night Bird Song was shown throughout 2016 and runs 150 minites.

“We’re so honored to be showing this new version at the Jazz at Lincoln Center. Thomas Chapin’s place in jazz history will become clear, and it will enchant the Center’s students when they discover the context in which he played in the '80s and '90s,” says Castillo. This is her 10th documentary.

The filmmaker wishes to especially invite musicians to attend the free screening who had never met Thomas Chapin or who do not know of him. “Come to this great jazz venue and be inspired by his story. See my tribute to a great jazz virtuoso who left us too soon,” says Castillo.

The film reveals Chapin’s music formation, including his six-year stint as Lionel Hampton's music director and lead alto sax. It goes on to detail Chapin's emergence as a musical force in the late 1980s in New York City’s downtown jazz scene and his incredible rise in the 1990s. Chapin was one of a few artists of his generation to exist in both the city’s downtown experimental scene and its uptown world of traditional jazz. Some called him a bridge to those two worlds. Fearless in his pursuit of creating edgy, engaging, cutting-edge sounds, he was tireless and passionate, pushing jazz forward. His influences were from classical and mainstream jazz and included Lionel Hampton, Jackie McLean, James Spaulding, Rahsaan Roland Kirk,Eric Dolphin and Paul Jeffrey.

Because of this film, says Castillo, Chapin will no longer be a footnote in jazz. “His indelible mark will be known for all time. Today, new listeners and young players are discovering and playing his music,” she says. Castillo spent four years making the documentary and interviewed more than 45 people in the U.S. and Europe.

Last Fall, the film screened at the prestigious Monterey Jazz Festival, and also won the Best Story Award at an international film festival in Nice, France.

Castillo and Izon believe that while this is a jazz film, it is for everyone, not just music or jazz fans. It shows audiences how one man lived an extraordinary, uncompromising life and managed to remain true to who he was.

Completed January 2016, the documentary has gained rave critical reviews and consistent accolades from viewers and critics whose comments include “inspiring,” “masterpiece,” and “a beautiful tribute.” Many have called it a must-see film.