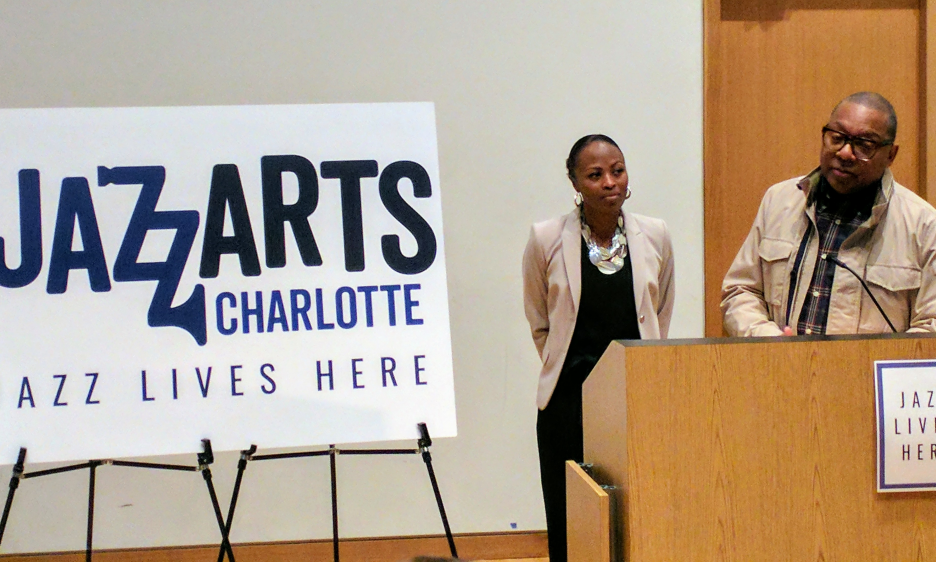 SOURCE: MARK SULLIVAN
April 2, 2019
Sign in to view read count
International jazz legend Wynton Marsalis joined JazzArts Charlotte President and CEO Lonnie Davis on Saturday, March 30 for a re-branding kickoff event held for sponsors, volunteers and local dignitaries. Ten years ago, Lonnie and O.C. Davis came to Charlotte from their hometown of New Orleans, displaced by Hurricane Katrina. They had an audacious dream to create a unique new organization that would be dedicated to jazz performance and education. They established the Jazz Arts Initiative.

Since that time the organization has rapidly grown into one of Charlotte’s most celebrated non-profit music and education institutions. Programs have included Jazz In Schools, summer jazz camps, the Jazz Academy, Youth Jazz Ensembles and Workshops and the venue The Jazz Room. The Jazz Room recently expanded to six shows a month, and is pleased to say that surveys have shown it to have the most diverse audience in Charlotte. In the coming year the Jazz Academy is expanding to include adults and children 3- 5 years old. And it will be offering WeBop: Jazz at Lincoln Center’s award-winning early-childhood jazz education program for children ages eight months to five years.

Since its inception, JazzArts Charlotte has offered nearly 200 jazz performances, creating a presence and opportunity for many exceptional local and regional musicians as well as attracting national and international talent to the community. In addition, over 50,000 students have been reached through 450 hours of annual instruction each year. Many of these students have gone on to attend some of the top music colleges and embark on successful musical careers.

To celebrate its 10th anniversary, the organization announced the next phase of its evolution that both recognizes the success to date and charts a visionary path for the future. It is no longer an initiative. The new name JazzArts Charlotte (Jazz Lives Here) celebrates the progress that has been made, and celebrates the community involvement that has made it possible.

Noted jazz trumpeter/bandleader Wynton Marsalis was on hand for the announcement. Long a supporter of education, he spoke of the power of music (jazz especially). It allows musicians to be themselves through improvisation; gives listeners permission to be themselves as well, increasing the desire for common ground; and the blues (the foundation of jazz) is regenerative. Music offers both entertainment and enrichment. Asked about the impact of nonprofit jazz organizations, Marsalis mentioned Jazz St. Louis and Jazz Houston, and said that the greatest impact comes from exposing children to jazz. It takes years to show, but it results in a new generation of jazz players and fans. Asked about his experience with successful jazz-related nonprofit organizations (he is artistic director of Jazz at Lincoln Center) he said that he believes in rigorous metrics. The organization should have the same discipline as the one required for musical performance, and the artistic and business visions must be in alignment.