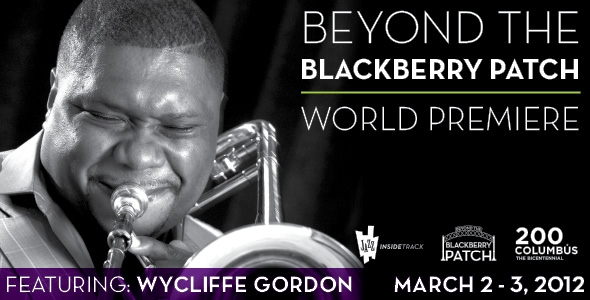 The Blackberry Patch is a folkloric name given to the area on Columbus' near east side where many settled during the Great Migration. Once known as the Cradle of Jazz, the King-Lincoln District was a hotbed of African American culture. Inspired by the writings of Anna Bishop, “Beyond the Blackberry Patch" is a new commission by Wycliffe Gordon and based on the research of eight neighborhood schools under the theme “King-Lincoln District: Then, Now, Next." The project also reflects the information of prominent members of the community including Aminah Robinson, Kojo Kamau, “Sweets" Edison, Rahsaan Roland Kirk, and Gene Walker. The commissioned piece will tell the story of this historic district through ten musicians, a dance troupe and a chorus and shine a light on its past, present and future.

Communities such as the King-Lincoln District are common in America's largest cities. Columbus has committed significant resources to restore this district and it currently serves as a model for the reclamation of a neighborhood—the reconstruction of the Lincoln Theatre, the cultural centerpiece of the District for nearly eighty years, represents the hope for the future.

The Inside Track music series is presented by Sequent with ongoing support from the Ohio Arts Council, the Greater Columbus Arts Council, The Columbus Foundation and the Westin Columbus. Concert sponsorship for “Beyond the Blackberry Patch" is provided by Lewis & Genevieve Smoot, Sr., US Bancorp Foundation and Time Warner Cable, with media support from The Columbus Dispatch, Columbus Alive, WOSU Public Media and WCBE 90.5 FM.

Musical ambassador and interpreter of America's music, Wycliffe Gordon experiences an impressive career touring the world performing hard-swinging, straight-ahead jazz receiving great acclaim from audiences and critics alike. His unmatched modern mastery of the plunger mute and his exceptional technique and signature sound has solidified Gordon a place in musical history known as one of the top trombonists of his generation. Jazz Journalists Association named him “Trombonist of the Year" in 2001, 2001, 2006, 2007, 2008 and 2011, and he is a past recipient of the ASCAP Foundation Vanguard Award, among others.

In addition to an extremely successful solo career, Gordon tours regularly leading the Wycliffe Gordon Quartet, headlining at legendary jazz venues and performing arts centers throughout the world. Gordon is a former veteran member of the Wynton Marsalis Septet, Lincoln Center Jazz Orchestra and has been a featured guest artist on Billy Taylor's “Jazz at the Kennedy Center" series. Gordon's extensive performance experience includes work with many of the most renowned jazz performers of the past and present.

Aaron Diehl is the 2011 Cole Porter Fellow in Jazz of the American Pianists Association, receiving over $100,000 in career assistance. Hailed by the New York Times as a “Revelation," Diehl's distinctive interpretations of the music of Scott Joplin, Jelly Roll Morton, Art Tatum, Duke Ellington, and other masters pays homage to the tradition while establishing his own original voice.

A native of the King-Lincoln District in Columbus, Ohio, Mr. Diehl is a 2007 graduate of the Juilliard School where his teachers included Kenny Barron, Eric Reed, and Oxana Yablonskaya. His honors include Lincoln Center's prestigious Martin E. Segal award in 2004, winner of the inaugural Jazz Arts Group Hank Marr High School Jazz Award in 2003, and Outstanding Soloist at Jazz at Lincoln Center's 2002 Essentially Ellington Competition. A former member of the Columbus Youth Jazz Orchestra, Diehl toured with the Wynton Marsalis Septet immediately following graduation from high school. Mr. Diehl currently resides in Manhattan where he serves as pianist for St. Joseph of the Holy Family Church in Harlem.

The passion with which Bobby Floyd plays piano, organ and keyboards are the result of his natural ability discovered at the age of two, his love of music, and years of practice. Whether performing jazz or gospel, as a soloist, with a trio or big band, his feel is unique and inspirational leading him to many distinguished appearances around the world.

Bobby has performed extensively in the U.S., Canada, Europe and Japan. Touring events include major jazz festivals, concert halls, and numerous night clubs with Ray Charles, Jeff Tyzik, Chris Howes and Sarah Morrow. The prestige associated with Floyd's international appearances can also be witnessed at home. In his hometown of Columbus, Ohio, Bobby has been a must-see feature with the Columbus Jazz Orchestra, the Columbus Symphony Orchestra, and ProMusica Chamber Orchestra sharing the stage with Dionne Warwick, Doc Severinson, Kevin Eubanks, Arturo Sandoval, Faye Robinson and many others. He has also appeared in a variety of performances opening for Spyro Gyra, Smokey Robinson, Stanley Clark and George Duke, as well as accompanying other artists like David “Fathead" Newman, Bobby Watson, Greg Osby and Billy Hart.