Jazz And Bluegrass: The Rosenthals, Father-son Duo, To Release Cd Collaboration "fly Away" 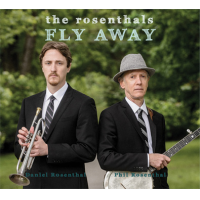 slideshow
Trumpeter/composer Daniel Rosenthal grew up playing folk music in the family band led by his father, acclaimed vocalist, songwriter, and bluegrass string player Phil Rosenthal, but he didn’t follow in his dad’s footsteps. Instead, he poured his creative energy into jazz, becoming a key member of Boston’s storied Either/Orchestra and leading his own forward-thinking quintet.

But The Rosenthals’ lifelong musical ties have recently asserted themselves, and on their first recording collaboration, Fly Away, father and son find plenty of common ground. Fly Away’s richly evocative original songs and traditional tunes were arranged and produced by Daniel, who infuses the music with an unmistakable jazz sensibility, and the album showcases Phil’s wondrously warm voice, a burnished Johnny Cash baritone that resonates with emotional authority. The new CD will be released on June 4 by Phil’s American Melody Records.

“On paper it doesn’t seem like it would work,” Daniel says. “But when I play with Phil I tone down the volume a lot. I’m playing long tones really softly behind his vocals, trying to emulate what a fiddle player would do, filling up the spaces when he’s not singing. It’s definitely a challenge to make the trumpet fit in with a folk or bluegrass instrumentation.”

On most of the original tunes Daniel added music to lyrics written and largely abandoned by Phil some three decades ago (around the time his son was born). Daniel revels in creating offbeat settings for his father’s world-weary voice, and sang tenor harmonies himself. (His mother Beth Sommers and sister Naomi Sommers contribute harmony vocals as well.)

For Phil, who has always produced his own albums and has never really collaborated on songwriting, turning the responsibilities over to his son opened up new musical possibilities. “He had definite ideas, and I was happy to have him in that role. He has a lot of influences that he brought into the project, making it a real blending of folk, bluegrass, and jazz.”

A Connecticut native, Phil Rosenthal is best known for his long run as lead singer and guitarist (beginning in 1977) with the popular bluegrass group The Seldom Scene. He’s also nationally renowned for his instrumental skills on banjo and mandolin, and as a songwriter and record producer. In 1986 he launched his solo career as well as American Melody (with his wife Beth Sommers), a recording company devoted to producing bluegrass and folk music for children and families. He performed around New England with his wife and two children as the Sommers-Rosenthal Family Band, which served as the primary vehicle for his prolific output as a songwriter (his “Muddy Water” was covered by Johnny Cash, Bill Monroe, and Nick Cave, among others). In 1994, the Connecticut Commission on the Arts appointed him the official Connecticut State Troubadour.

Born in Silver Spring, MD, and raised in Guilford, CT, Daniel Rosenthal early on gravitated to the trumpet, rather than the stringed instruments all around him, and figured out ways to fit the horn into the family ensemble. Louis Armstrong was a major inspiration. By 13 Daniel was gigging with a trio (trumpet, organ, drums) at local restaurants and coffeehouses, and in high school he worked on absorbing the jazz trumpet lineage. At New England Conservatory, he studied with soprano saxophonist Steve Lacy, trombonist/arranger Bob Brookmeyer, and Charles Schlueter, principal trumpeter for the Boston Symphony. Daniel joined the Either/Orchestra in 2006, and in 2011 American Melody released his debut as a leader, Lines, four tracks of which featured a banjo (“There’s something about trumpet and banjo, that metal on metal blend, that’s always intrigued me”).

“Growing up in the countryside changes how you hear music,” Daniel told DownBeat’s Geoffrey Himes last year. “I played a lot with my father and his friends, and his friends would yell at me, ‘Play the melody, play more simply.’ That seeped into my sensibility. Ironically, at the NEC, Steve Lacy and Bob Brookmeyer were always after me to streamline my playing, to say more with fewer notes, which is pretty much the same thing.”