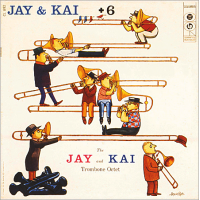 slideshow
Since we're on the subject this week of multiple instruments of the same stripe working together, let's dig one of the best albums of trombones— Jay & Kay + 6, produced by George Avakian over three dates in April 1956 for the Columbia label. It's almost frightening to write down who's on this octet album. In the trombone chairs: J.J. Johnson, Kai Winding, Bob Alexander, Eddie Bert, Urbie Green, Jimmy Cleveland (tb) Tom Mitchell and Bart Varsalona (b-tb). The rhythm section: Hank Jones (p), Milt Hinton (b) and Osie Johnson (d). And when Hinton had to bow out on one of the dates, Ray Brown stepped in on The Continental, A Night in Tunisia, All At Once You Love Her, The Peanut Vendor and Four Plus Four. Also added on these tracks was Candido Camero on conga and bongos.

What's particularly special about this album is how great an arranger Johnson was. His charts are, well, off the charts. And his solos are big and powerful as he's chased along by a pack of barking trombones. If Johnson is like listening to a champion boxer work out on a heavy bag—each note hitting with a high-impact rhythmic thud—Kai's arrangements and solos are like listening to a dexterous bar waiter. There's breathtaking risk and elegance in his arrangements, and his solos sound like that waiter transporting drinks to a table through a crowded room. You marvel at how the notes arrived at the table without a drop being spilled.

There's also the play between slide trombone, the valve trombones and an instrument called the trombonium (paging Stan Kenton), an upright valve trombone with a periscope bell that makes the instrument look like the offspring of a baritone. The compact trombonium was designed for marching bands, eliminating the threat of the slide and valve trombone's extension to the back and head of the next musician.

If you're unfamiliar with J.J. Johnson and Kai Winding, who routinely played together on albums for multiple labels throughout the 1950s and into the '60s, this is a terrific introduction. The music is lyrical, it swings and it's loaded with high-test energy and daring. My only wish is that George had ordered up two more Columbia albums like this one.