Jason Moran Shows off His Older, Wiser Side On 'Ten' 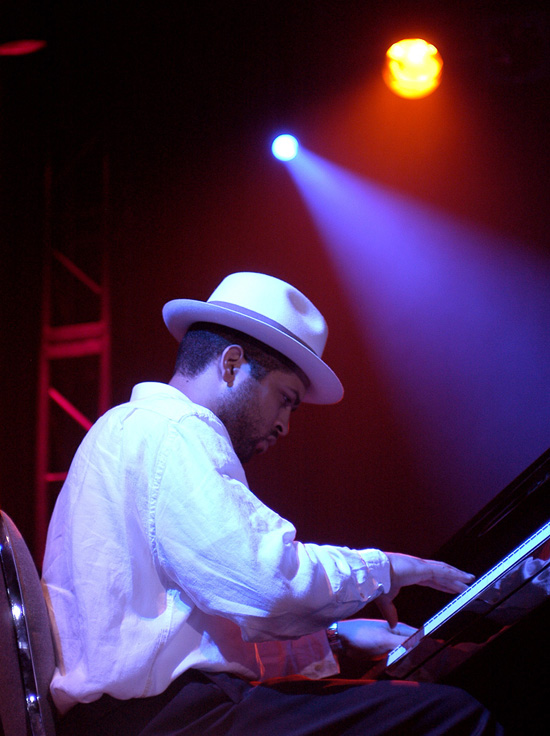 slideshow
Pianist Jason Morans star has been on a long steady rise since making his debut on Blue Note in 1999 with 'Soundtrack to Human Emotion.' Barely into his 20s at the time, Moran was playing with saxophonist Greg Osby and had studied under Jaki Byard and others. The debut won a lot of strong notices and he followed it up in 2000 with 'Facing Left,' which featured the debut of his trio Bandwagon, and 2001's 'Black Stars,' which added elder statesman Sam Rivers to the mix.

Each succeeding album found the pianist surpassing a prodigy's heady expectations by continually building on the strengths of past work without repeating himself. Now with the release of 'Ten,' his eighth album as a leader, we find Moran more self-assured than ever while still moving in an upward trajectory. His first LP in four years finds him less the young gun and more as an artist comfortable in his own skin.

“Signing to Blue Note at a really young age and dealing with the canon as a pianist, all my favorite pianists are on the label so you want to satisfy that legacy of what the label is and how your music stands up to it," Moran tells Spinner. “I stabbed that pole really deep into the ground so that, even though the wind would come and try to knock it over, it would still stand up. Now I don't feel like I have to do all that hammering."

Now married and the father of twin sons, Moran has, like so many of us, settled into his life. He's less concerned about perception and more about trying to find a balance between creative fulfillment and being a good father and husband. To paraphrase Moran, music means something else to him now than it even did four years ago.

“It's just way more relaxed in its presentation," Moran says of 'Ten.' “I don't want to compare it to my other records, but for me it was more emotionally relaxing. Before I felt like I had duties that I imposed upon my self that I wanted to satisfy on a record. This was just to play, almost like it was a gig."

Moran mixed it up a little by going into a different studio than the other albums and opted to record in the late afternoon instead of morning. Adding to the gig atmosphere, the band ate BBQ and drank whiskey. In 10 years of steady gigging together, Bandwagon have an easygoing swagger these days. The group doesn't have to prove anything to anyone so now they can get down to the business of just dealing with the music and hanging out they way old friends do.

The album's 13 tracks continue on in several Moran traditions. The album opens with a stunning trio of originals called 'Blue Blocks,' 'RFK in the Land of Apartheid' and 'Feedback Pt. 2,' which pairs a eerie sample of what sounds like a computer printer paired with a the trio working through an evolving ballad.

All three originals are as good as anything the band has done, but it's the covers that say more about the band and Moran in particular. Thelonious Monk's 'Crepuscule With Nellie' rocks back forth between a straight interpretation on the melody and chopping it up with heavy doses of blues and stride piano. There two pieces by modern classical composer Conlon Nancarrow, who created rolls for player piano to ensure that his superhuman compositions were played properly. Moran takes these challenges in stride, focusing the melody and stripping away some of the filigree.

The most personal cover is of 'To Bob Vatel in Paris' by Jaki Byard, who was shot and killed in his apartment in 1999. “I haven't gotten over the fact that he was murdered," says the former student. “I haven't gotten over what he's given me as a student, so I sort of hold these things really close to me. I own them and it's something I don't ever really want to separate from."

It's this trifecta of personal connection, theory and talent that makes Moran the presence he is on the jazz scene. Along with leading his band, he can also be found playing a wide variety of gigs, including regular work with Charles Lloyd and Overtone Quartet, which also features Dave Holland, Eric Harland and Chris Potter. A tremendous fan of visual art, Moran has even done his share of music and multimedia commissions that's led to him naming his 2006 album 'Artist in Residence.' It's all led to a lot of acclaim for the pianist, but Moran is still smart enough to not take the audience for granted.

“This isn't McDonalds or some s---, so it can't be sold as a commodity in that way," he points out. “A person that listens to this kind of music has to be up for the challenge. They are comfortable with not understanding everything. People show up for different reasons. The musician never really knows why. Whether it's Matt Shipp, Keith Jarrett, Vijay Iyer or myself, it's kind of cool that the audiences are showing up not knowing what's gonna happen."