Jane Hall: Song in My Heart 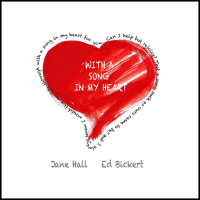 slideshow
Jane Hall's first and only album, With a Song in My Heart, was released in 2017. The album was recorded in the 1980s as a gift to her husband, the great jazz guitarist Jim Hall. I first heard about the recording a couple of weeks ago, when Devra Hall Levy, Jim and Jane's daughter, told me about it. It's gorgeous—with Jane's breathy, child-like Blossom Dearie phrasing and Ed Bickert's sublime framing and chord voicings.

The album is wonderful on several levels. First, Jane has a beautiful, natural singing voice free from pretension. Second, she is backed only by elegant guitarist Ed Bickert. Third, she originally recorded the songs as a personal surprise valentine for her husband (who died in 2013).

Curious about the wonderful love story behind the album's conception and recording, I gave Jane a call yesterday and interviewed her:

JazzWax: Tell me about your background as a singer?

Jane Hall: There’s nothing really to tell (laughs). I don’t have a background as a singer. I just sang with Jim at home or in our car. He liked my voice. When we went on our first date, he knew I liked music and asked if I wanted to sing a song. He had his guitar out.

JW: Where did you and Jim meet?

JH: In 1960, we both lived in Greenwich Village, a couple of blocks from each other. He rented [pianist] Dick Katz’s apartment on 12th Street. I lived on 10th Street.

JW: How did you know Dick Katz?

JH: We were friends. Nothing serious. One night the two of us were going to have dinner together. Dick (above) said he had to stop first at a bar to meet Jim Hall.

JW: Did you know Jim then?

JH: No. And I didn’t know much about jazz. Dick and I stopped in at the Van Rensselaer bar in the Van Rensselaer Hotel on E. 11th. There was Jim at the bar. I remember being surprised he wasn’t Edmond Hall, the jazz clarinetist. That’s who I thought Dick said he was meeting.

JW: After meeting Jim, did you and Dick leave for dinner?

JH: No, the three of us went off to eat. We invited Jim to join us. We ate at Sayat-Nova, an Armenian restaurant that was on Charles Street. Little by little, I wasn’t paying attention to Dick (laughs).

JW: What was so special about Jim?

JH: He had an aura of kindness about him. At dinner, he mentioned he was on his way to California to his brother’s wedding and that he wouldn’t be back for a month. I had a nice time that evening. The next day I went about my business. [Photo above of Jim and Jane Hall with Django, courtesy of Jane Hall]

JW: How did Jim get back in touch with you?

JH: Dick must have given him my number. One day, the phone rang. Jim was on the other end. He said he was back in New York and would love to get together. I was a little flustered, since I was taken by surprise.

JW: What did you do on your first date—without Dick Katz?

JH: (Laughs) Jim asked if I wanted to come to the club where he was playing. It was a little club that’s no longer around. He was performing as a duo with Lee Konitz. I remember they were playing opposite a comedy duo—Dick Libertini and McIntyre Dixon.

JW: What did you think of Jim’s playing?

JH: I thought he was great. I was really impressed and loved the music. It was a hard gig. Lee was very moody, and Jim was suffering a bit.

JH: A few days later, Jim invited me up to his apartment, the one he was renting from Dick. That’s where I first sang for him. He took out his guitar and I sang I’ll Remember April and Gone With the Wind. Years later he teased me: “I wanted to see if you were musical.”

JW: When did you two marry?

JH: It took us five years (laughs). We started living together first in 1962 or ‘63. Jim was wary of getting married because his parents had  divorced. We finally married in 1965. We were married for 48 years, up until Jim's death in 2013.

JW: Where did you two live?

JH: I found us an apartment on the 7th floor of a building on 12th Street. Fortunately, the building had an elevator. Jim practiced every day and said my singing with him around the apartment helped his practicing. I’d sing with him for an hour or so, and we’d often sing together in the car.

JW: If you didn’t know much about jazz, what did you sing?

JH: Show tunes. My parents had taken me to all the musicals as a kid. I was very musical. Jim didn’t know a lot of those songs. He used to think that Body and Soul was great because of Coleman Hawkins’s famous recording. I’d argue that the song was great because it was written in 1930 for Gertrude Lawrence and it first appeared in a revue called Three’s a Crowd. Every night before we fell asleep, I’d sing Jim a different song.

JW: What was the idea behind your album, With a Song in My Heart?

JH: Funny, it wasn’t supposed to be an album. Jim was away on tour in Europe at some point in the 1980s. I wanted to surprise him with a tape recording of me singing and give it to him around his birthday in December.

JW: How did you pull that off?

JH: I had met Canadian jazz guitarist Ed Bickert years earlier. Jim and Ed were close. Ed loves songs. We talked about the idea for a while. At some point, I went up to Toronto to visit with Don and Norma Thompson. Don was Jim’s bassist. I became very friendly with them. Ed lived in Toronto and suggested we record at a little studio in the city. Ed and I sang a few songs. It worked out, so we decided on 12 songs.

JW: What did people in the studio's control booth think?

JH: Ed and I did it just for fun. After, the engineer thought enough of what he heard that he suggested we put it out commercially. But neither of us had the wherewithal or the ambition to do that. We just put it on a cassette, and I gave the tape to Jim.

JW: What did Jim think?

JH: Jim adored it. The tape made him smile all the time. And he loved Ed’s playing. Ed is a wonderful accompanist.

JW: Why didn’t you release it back then?

JH: I was working as a psychoanalyst. I didn’t want to be a singer. At some point, Jim was afraid the tape would wear out or become damaged. So he went to pianist Fred Hersch’s house with the cassette. Fred had a studio there. They copied the cassette onto a master reel.

JH: Brian Camelio, Jim’s long-time producer, heard me playing the tape after Jim died. Brian had founded ArtistShare, the record company. He urged me to let him put it out. I said OK. After Brian put it up on ArtistShare, we sold a lot of copies right away and were able to pay off the cost of putting it out.

JW: Which songs on the tape did Jim love most?

JH: My Funny Valentine and ‘Round Midnight. He was always impressed by the way I sang that song. He also loved my voice on With a Song in My Heart.

JW: Where did you first give Jim the tape?

JH: In the living room of our summer house in Garrison, N.Y. I said, “Sit down,” and I put it on. He loved the tape and played it all the time.

JW: Does hearing the CD now still remind you of Jim?

JH: I always think of Jim. He’s always in my thoughts. Whenever I hear the CD, I remember his delighted expression the first time I played him the cassette.

Here's Jim Hall playing 'Round Midnight in Toronto in 1975...