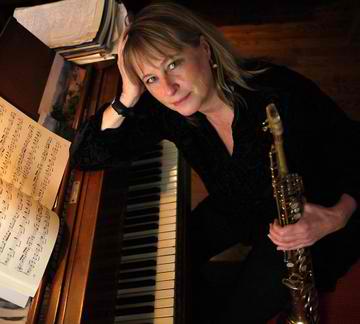 slideshow
Saxophonist/flutist Jane Bunnett is set to perform at the Blue Note in New York on Monday, September 22 with performances at 8:00PM and 10:30PM. Combined in support of her upcoming album Jane Bunnett and Maqueque, the performance will be the New York debut for Maqueque. Bunnett will be joined by an exhilarating all female band featuring vocalist Daymé Arocena, pianist Danae Olano, bassist Cecilia Jimenez, drummer Yissy García, and percussionist Magdelys Savigne.

For more than thirty years, Bunnett has been bridging the gulf between Cuba and North America, introducing jazz audiences to some of the finest musicians that the island has to offer. Through her longstanding ensemble Spirits of Havana, Bunnett has provided early opportunities to such future greats as Dafnis Prieto, Yosvany Terry, Pedrito Martínez, and David Virelles, and also becoming a Canadian national treasure as well as an internationally acclaimed jazz artist in the process. Now, with her new sextet Maqueque, she introduces the world to some of Cuba's most promising female musicians, injecting her own music with an invigorating dose of youthful energy in the process.

The band's name was provided by Arocena's grandmother, a practitioner of the Afro-Cuban Yorùbá religion. It translates to “the spirit of a young girl," which perfectly captures the vibe of the group and the song that shares its name. “I imagine that's what I was like as a ten-year-old girl," Bunnett says. “I was very energetic, I could be sweet and I could be feisty. That's Maqueque."

Over her decades of visits to Cuba, Bunnett observed that almost 75% of the students in the country's many conservatories were female, but the jam sessions that she attended at night would be almost exclusively male. “When they finish all their training, you don't see them out on the scene," Bunnett says. “At jam sessions, I would notice some of the young girls I had seen at the schools just sitting on the sidelines, happy to watch their boyfriends up there playing. It seemed really strange."

She didn't set out to form an all-female band, but the seeds were planted when Bunnett and her husband, trumpeter Larry Cramer, met Arocena during a trip to Havana with Toronto radio station JAZZ.FM91's Jazz Safari program. “I organized a private jam session in the hotel for the Safari folks and invited a few of the Cuban artists from the jazz festival to come and play with me," Bunnett recalls. “I met Daymé in the lobby and she said she was a singer, so I asked her to come. She jumped in and her vocal ability was way beyond her years. She has this very old-soul voice for this young person. It's really unusual and very powerful."

That voice stuck in Bunnett's mind. A few months later, she was asked to serve as artistic director for “Funny Girls and Dynamic Divas," an annual fundraising event for Sistering, a Toronto-based social service agency for women. She brought Arocena to Toronto to perform for the occasion and the singer, Bunnett says, “brought the house down."

The response that day planted the seed for Maqueque. Bunnett and Cramer joined Arocena in Cuba to scout for talent, and ended up with the group of women who now make up the sextet, most of them in the early 20s and in the earliest stages of what promise to be fruitful careers. Yusa is slightly older and is an in-demand player in both Cuba and Argentina, while García, only in her mid-20s, is already a well-known figure in the Cuban music scene and has worked with such renowned artists as David Sanborn, Omara Portuondo, Horacio “El Negro" Hernandez, Giovanni Hidalgo, and Roy Hargrove.

The all-female line-up provides the band with a unique energy, Bunnett says. “There's a very happy energy about it," she describes. “All of the women are very supportive of each other. I've seen a couple of all-women groups in Cuba that are geared toward tourists and can border on being pretty cheesy. What we're doing is creative and collaborative and involves a lot of the Afro-Cuban elements that stem out of traditional folkloric music."