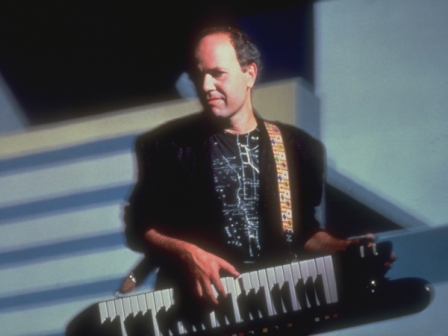 This week marks the 25th anniversary of Jan Hammer's now iconic “Miami Vice" theme's ascent to the #1 spot on the Billboard Hot 100 chart. In those 25 years, there has not been another instrumental track that has experienced an equal measure of chart success.

While Miami Vice the television show came to epitomize the 1980s, spawning fashion trends and a culture that have long fallen out of fashion, the theme that Hammer composed for the show has in no way lost its edge. It has been featured in films such as Adam Sandler's The Wedding Singer, Charlie's Angels, television shows such as The Simpsons, American Idol, America's Got Talent, and the UK's Top Gear, and in countless commercials.

“Crockett's Theme"—which Hammer also wrote for Miami Vice and which was originally featured on Hammer's album, Escape From Television&#151adds sonic texture to the LeBron James video, “What Should I Do?" which also features a cameo by Don Johnson. The video is currently airing on the Nike website, as well as on YouTube, where it's received nearly 4 million views. “Crockett's Theme" will also be featured in the television spot for James' new basketball shoe the LeBron 8 South Beach Edition.

“Crockett's Theme" has been included on over 100 CD compilations in addition to Escape from Television, including Virgin's double-platinum Pure Moods. Recently, Hammer collaborated with urban vocalist TQ on a rap version, which was the #1 downloaded track for several weeks on iTunes in Europe.

Hammer's talents continue to be tapped by other musicians. Drummer Gary Husband's upcoming Abstract Logix November 16 release, Dirty and Beautiful Volume One features Hammer and fellow Mahavishnu Orchestra alumni John McLaughlin and Jerry Goodman, auspiciously marking the first time the three have performed on the same project since the group disbanded in 1973. Hammer performs on the opening track, “Leave Em On," and Husband also includes a Hammer composition, “Between the Sheets of Music," which was included on the keyboardist's 1979 Asylum release, Black Sheep.

Hammer also recently collaborated with big beat/electronica's Junkie XL (whose version of Elvis Presley's “A Little Less Conversation" was a # 1 hit in over twenty countries) on the Dutch remix master's latest project, Fairlight EP, for which the two wrote and performed the track “Made For Each Other."