Jan Hammer Will Release Sketches In Jazz On March 27

'Although jazz has always ruled my world, I drifted farther and farther away from that passion as I began to work in TV, films and games... Regardless, I feel that jazz is inseparable from improvisation, and improvisation has always fueled my journey and so has brought me back full circle to this project.'
—Jan Hammer 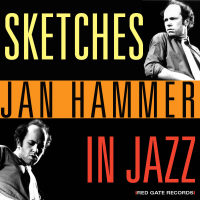 slideshow
While he may be best known for his Grammy-award-winning music for Miami Vice, Jan Hammer’s roots have always been planted firmly in jazz. He was 14 when he formed his first jazz trio in Czechoslovakia, after which he came to the United States to study jazz at the Berklee College of Music. He spent a year as keyboardist/conductor for the inimitable Sarah Vaughan before joining forces in 1971 with John McLaughlin, Jerry Goodman, Rick Laird, and Billy Cobham in the Mahavishnu Orchestra, veering from the traditional jazz path into the then- burgeoning world of jazz rock.

On March 27, Hammer will release Sketches in Jazz, a collection of ten tracks that demonstrate the lasting influence of the musicians who enchanted him as he was coming up—musicians such as Miles Davis, John Coltrane and Bill Evans. “Although jazz has always ruled my world, I drifted farther and farther away from that passion as I began to work in TV, films and games,” says Hammer. “Regardless, I feel that jazz is inseparable from improvisation, and improvisation has always fueled my journey and so has brought me back full circle to this project.”

Improvisation and the workings of the creative process are the core of Sketches in Jazz, with some of the album’s tracks running shorter than the typical extended jazz performances. Rather than view these shorter pieces as incomplete, Hammer says they serve to illustrate how his work evolves, much as a visual artist creates sketches before beginning a painting. These brief tracks are indicative of Hammer’s ability to create cues and scores that convey a wide range of moods, a talent that also served him well during his four seasons working on Miami Vice.

Highlights of the album include a jazz version of “Magic Theater,” a song that originally appeared on Hammer’s album BEYOND The Mind's Eye, on which he adventurously ventured into the world of computer animation as the composer and performer of the original score for the chart-topping Miramar Productions video. On this version of “Magic Theater,” Hammer’s use of the muted sounds of a trumpet invoke a Miles Davis-like atmosphere. The tune “First Light” is an example of a more “contemporary” style of jazz driven by an R&B type of groove.

Perhaps the most straight ahead track on the album is “My Father’s Vibes,” which pays homage to Hammer’s father, a doctor who worked his way through school playing vibraphone and bass. The piano trio piece, “Deep Pool,” is an introspective piece in the spirit of Bill Evans. In an interview for Electronic Musician in 2018 (in support of Seasons: Part 1, his first release in nearly two decades) Hammer acknowledged that he’d been listening quite a bit to Evans’ The Complete Village Vanguard Recordings, calling it a “mind-blowing beauty.” On “Deep Pool,” its influence is clearly felt.

Hammer’s 2018 release, Seasons: Part 1, received strong reviews internationally. Something Else Reviews called it, “fully orchestrated... springing from his fertile mind and creatively assisted by technology.” As he enters his fifth decade of creating timeless music, Sketches in Jazz, which is a digital-only release, again proves that Hammer is as comfortable revisiting his past as he is with journeying into the future.