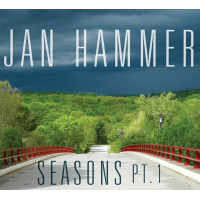 slideshow
On July 20, after a nearly 10 year-long hiatus, Jan Hammer—whose extensive body of work has spanned the musical spectrum from jazz to prog to classical to pop—will release Seasons Pt. 1, a compilation of existing musical sketches that Jan developed into full length compositions and selections that were created just for this album. Why the delay? Laughing, Hammer emphatically says, “It’s about time.”

“I’ve actually been thinking about releasing something new for 6 or 7 years,” he continues. “This is what happens—musical ideas had accumulated in my head over time until I suddenly realized that I had more than enough for an album.” In fact, Hammer says that he’s already at work developing what now only exist as sketches for a follow up album, which will be aptly titled Seasons Pt. 2.

Seasons Pt. 1 features 13 tracks that range in style from the dynamic “April” to the majestic, classically tinged “Suite European.” Hammer cites influences as far ranging as the varied strains of the music he grew up with to what he calls “the elephant in the room”—his four seasons scoring Miami Vice. “I really had these residual feelings of unfinished business,” say the two-time Grammy winner. “I’m proud of the work I did for the show, and there are echoes of that music that continue to resonate for me.”

Obviously, Jan’s music for Miami Vice continues to resonate with a large audience. “Crockett’s Theme” and “Miami Vice Theme” together have over 14 million streams on Spotify. Collectively, videos using his music from Miami Vice have well over 100 million views on YouTube.

Hammer’s work during his five decades-long career alongside such critically acclaimed artists as the Mahavishnu Orchestra, Neal Schon, John Abercrombie, Al Di Meola, Tony Williams, Mick Jagger, and Jeff Beck (with whom he recently performed, for the first time in 10 years, at Beck’s 2016 concert at the Hollywood Bowl) seasons the album with flavors of rock and jazz. His background as a classically trained composer is also evident throughout.

While no single style can define the album. Hammer himself describes it as “cinematic,” and as a collection of “pop songs without words.” The opening track, “Miami – Night,” was inspired by Miami Vice director Michael Mann’s technique of spraying the streets with water when taping at night to set the mood for a scene. “When I wrote ‘Miami – Night,’ explains Hammer, it felt like I was creating an opening scene in a screenplay.” Hammer has created scores for film, television shows, commercials and video games both in the US and internationally, and it’s obvious that his ability to paint pictures with sound has served and continues to serve him well.

Hammer is also widely acclaimed as a pioneer in electronic music. He was among the first musicians to play the Minimoog Moog synthesizer in a live setting. He also explored the world of computer animation as the composer and performer of the original score for the triple platinum Miramar Productions video album, BEYOND The Mind's Eye, which critic Leonard Maltin lauded as “a dazzling showcase for computer animation... mesmerizing... BEYOND The Mind's Eye reflects a maturing of the [computer animation] art." Seasons Pt. 1 is evidence that Hammer’s own musical evolution is keeping pace with the evolution of virtual instruments. While he is constantly impressed by the way synthesized music continues to evolve, he also acknowledges tradition. “Of course, I still have Korg, Yamaha and Kurzweil keyboards in my studio and I am always drawn to where it all started, on my grand piano,” he says.

As he enters his 5th decade of creating music that endures the test of time, Hammer is excited about being back on the scene, gratifying his loyal fans and bringing new fans into the fold.