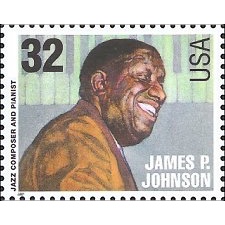 slideshow
Today, February 2, is the birthday of James P. Johnson (1894-1955), who developed stride piano as an art form within an art form. In his time, piano cutting contests were proving grounds—most often in Harlem apartments—where competing pianists showed their stuff. If James P was playing, their stuff was likely not to be good enough. Johnson’s most famous composition was “Carolina Shout,” a test of a pianist’s swing, power and rhythm. He recorded it several times. Many pianists, critics and jazz historians consider this 1921 version his best.

At those cutting contests, if Fats Waller was in attendance he usually placed second to the master. Here is Waller’s “Carolina Shout.”

If your videos are blocked, sorry about that. The Johnson and Waller tracks turn out to be banned from YouTube by the record companies that own them, although they may be visible in some areas. If they are missing on your screen, you can see them by clicking on Watch on YouTube in the panels above. Then come back to Rifftides.

Dozens of pianists have recorded “Carolina Shout” in the century or so since James P. wrote it. You’ll find many of their versions on this YouTube page.

It is also Stan Getz’s Birthday. He would have been been 90. His daughter Beverly posted on her Facebook page a link to her father playing what Bev called “the ultimate standard” for Bill Evans on his birthday in August of 1974, when Evans turned 45.