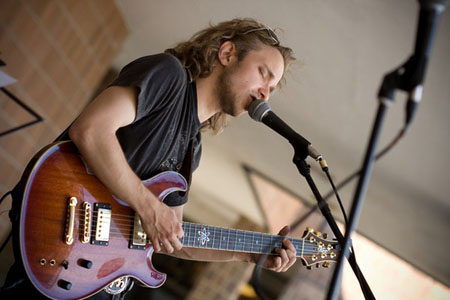 slideshow
New York, New York -- Jake Hertzog is a guitarist, composer, and bandleader that has just realized his potential with an all instrumental jazz fusion release titled Chromatosphere on That’s Out Records, which will be released April 7, 2009. This is Jake’s first full length solo recording and it promises to be well received by the media and smart jazz listeners everywhere.Hertzog has been seen performing on nationally renowned programs and with top acts such as The Naked Brothers Band and has performed with them on national television shows such as Good Morning America and ABC's The View, Nickelodeon Kids Choice Awards and NBC's TODAY show and CW11 Morning Show and Fox Morning Show.

The project Chromatosphere was recorded and produced by Grammy winner Joshua Paul Thompson and features some of the best musicians on the New York scene including Victor Jones, Harvie S and special guest Michael Wolff. Hertzog’s music was also featured on the Berklee student jazz record label, Jazz Revelation on their 2007 compilation The New Old School and their 2006 compilation, Ars Nova.

Although Jake played in rock bands early on he soon turned his interests to jazz. While still in high school he began studying with Chip McNeill and performed regularly with University of Illinois jazz ensembles to hone his chops. After graduating Hertzog began his studies at the world famous Berklee College of Music in Boston. As a 17 year old scholarship student, Jake started off his stay at the school with some of the most distinguished teachers on the globe including Mick Goodrick, Rick Peckham, Hal Crook, and Ritchie Hart. He also has worked closely with jazz heavyweights such as Joe Lovano, Terri Lyne Carrington, Dave Samuels, Greg Hopkins, and Phil Wilson.

Hertzog is excited about the upcoming release of Chromatosphere and is very anxious to share his music with fans across the country. More information on Jake and his work can be accessed on his website.