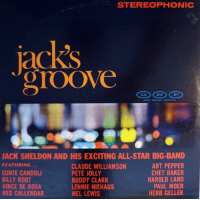 slideshow
Back in the 1950s, Jack Sheldon was a trumpeter with many talents. He was part comic, actor and singer and completely at ease in his own skin. But as a musician, he played with deep sincerity and a brooding sensitivity, especially on ballads. He was beloved by everyone on the West Coast jazz scene, largely because of his jovial personality and industriousness, professionalism and poetic playing style. Which is saying something, considering how many exceptional trumpeters there were in Los Angeles in the 1950s and beyond. Sheldon is still with us today (he's 84 now), and his sturdy, gentle horn on recordings remains a joy.

I have no idea why the entire album wasn't recorded in Dec. '58. My guess is that the demands of the Hollywood record studios were such that Lennie either didn't write enough arrangements for a full 12-inch album, wasn't paid enough to write a full album's worth, or most of the musicians, including Sheldon, had other studio obligations. For the second session, Moer—best known as the pianist in Les Brown's band, wrote all of the arrangements.

For the 1959 session, Moer composed and arranged J.S., Aplomb and Anyhow. He also arranged Teddy Edwards' Sunset Eyes and Bobby Troup's Julie Is Her Name, that album's finest ballad.

On the album's first half from '58, the tentet has a bouncy and jaunty feel, in the tradition of many West Coast ensembles, with Sheldon blowing pure and without overstating his solo lines. The group is most notable for Root's solo passages. He's truly an overlooked giant of the instrument. And Brown Cow, the Kahn chart, really swings, though I would have guessed it was arranged by Shorty Rogers.

The nonet on the album's second half from '59 has a slightly more lyrical feel. Interestingly, a flutist isn't listed on the album or in the Jazz Discography but I hear one anyway on Anyhow. It must be Herb Geller (above) doubling on the instrument. Sheldon, again, plays in the most tender, understated way. His improvised runs are so powdery and seemingly effortless.

This is a perfect album, and one you should own.