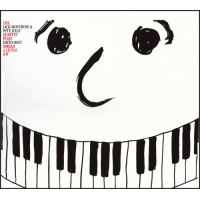 Between 1985 and 1990, tenor saxophonist Jack Montrose recorded three sterling albums in Hollywood with pianist and friend Pete Jolly. What the three albums had in common was the music of David Holt. They also featured the same quartet: Jack Montrose (ts), Pete Jolly (p), Chuck Berghofer (b) and Nick Martinis (d).

All three albums—Better Late Than Never (1985), Spread a Little Joy (1987) and Let's Do It (1990) appeared on obscure labels and two of the three don't seem to have been released digitally. The first two were on Slingshot Records and the third, which included trombonist Bill Watrous, was on Holt Records. I'm guessing that Holt had something to do with Slingshot as well.

Mind you, these are hardly vanity albums for composer Holt. Montrose and Jolly had enormous respect for Holt and his music. All have storytelling melody lines, and you can hear the respect the musicians had for the music in their extraordinary playing. Holt's songs were superb by any measure. Yet these albums are somewhat of a mystery given their rarity.

First, who was David Holt? Born in 1927, Holt and his family were lured to Hollywood by actor Will Rogers, who promised to find young Hold child-actor parts. But after Holt's father quit his job in Florida and moved the family to Los Angeles, Rogers refused to see them. Holt's father worked as a laborer while his mother tried to find work as an actor. Early on, his mother managed to win her son only bit parts in B films.

Then in 1934, Holt was cast in You Belong to Me and became a child star. Paramount touted him as the male Shirley Temple, and Holt made 20 films over the next six years. He continued to land parts into the 1940s, but he suffered from anxiety and developed a troubled reputation. By the time he was 25 in 1952, his luck in the movie business had run out. [Photo above of David Holt, right]

To make ends meet, Holt turned to songwriting, which is probably how he befriended jazz musicians Jack Montrose and Pete Jolly. In the 1960s, he went into real estate and retired in 1985 at age 58. Which probably explains how he could afford to start record labels and hire Montrose, Jolly, Berghofer and Martinis to record his songs.

Though Montrose appeared on many albums recorded on the West Coast in the 1950s—including a handful of leadership albums with baritone saxophonist Bob Gordon—he was mostly featured as a superb sideman and arranger. On Shorty Rogers's Plays Richard Rodgers (1957), Montrose was in the reed section and Jolly was on piano.

But a serious drug habit made Montrose increasingly unreliable, sidelining him for years in the 1960s. By the time he straightened himself out, his heavy, melodic style of playing was no longer in vogue. Work in strip clubs and casinos followed. Not until the late 1970s and '80s did he team with Pete Jolly. And it's fair to say that his three albums of Holt's compositions were the high points of his career. Jolly was a magical, spry player, and a perfect foil for Montrose's meaty sound.

Perhaps Fresh Sound will re-issue these three albums in one two-CD set in the near future. The sound is great.