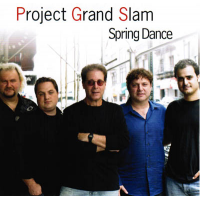 slideshow
Los Angeles, CA: When is the last time a jazz ensemble named after the nefarious scheme of a James Bond villain packed such a solidly melodic and grooving punch?

Project Grand Slam, named by leader Robert Miller as a play on “Goldfinger”’s plan to steal all the gold from Fort Knox, is probably the first—and he and PGS are up to plenty of melodic and grooving wonder this summer on Spring Dance, their explosive new album on Cakewalk Records.

The collection’s lead track is its title tune, an upbeat, feel-good, winner penned by Miller. Miller’s other songs include the Joe Zawinal tribute “Joe Z,” a high energy blast that brings to mind the fiery fusion magic of Weather Report, complete with exotic chanting and old school keyboards; the sensual and elegant soprano sax led ballad “Ma Petite Fleur,” a piece Miller dedicates to his wife and that he calls his favorite on the collection; the brass-fired, classic blues-funk explosion “Catch You Later”; and “Flat Busted,” an in-the-pocket, mid tempo grooving urban jazz tune featuring Gilad Ronen’s hypnotic flute runs.

Ronen and Joye Hennessey’s “Remember” is featured first as a dramatic and soulful, longing romantic vocal (highlighted by strings and an emotional sax solo) and, as a coda to Spring Dance, a thoughtful and reflective instrumental that evolves into a percussive, easy rolling, rhythmically engaging samba. Ronen also composed the ambient, slightly melancholy ballad “The Turn,” which featured a smoky sax melody and soaring horn textures.

The band also covered the old Hollie’s hit, “He Ain’t Heavy, He’s My Brother”. Says Miller: “Joye did an incredible job with the song, almost like Mariah Carey singing jazz!”. The eclectic nine-track collection is the follow-up release to PGS’ critically acclaimed 2008 debut, Play, which included the Top 20 jazz radio hit “The Captain Of Her Heart” (sung by Judie Tzuke). Five of the tracks from Play, along with the band itself (with Miller having a speaking part), were prominently featured in an episode of the hit NBC-TV series “Lipstick Jungle,” starring Brooke Shields. PGS did several live performances at clubs in NYC in addition to a charity show for the Ronald McDonald House.

For the new album Miller invited Mike Eckroth, keyboardist for guitar legend John Scofield, and alto sax man Danny Lerman to complement the core trio. After a few days of rehearsal, the new lineup of PGS convened in the studio and nailed the basic tracks in a week, with most songs done in two or three takes. After some overdubs, Justin Smith was brought in to sweeten some of the tracks with strings. And Joye Hennessey added her soaring vocals.

Miller is a renowned solo artist. His debut project, Child’s Play (Wildcat Records 1994) included performances by Randy Brecker, Jon Lucien and Anton Fig; his follow up, Prisoners of Love (1996) was released on 32 Records, a label Miller co-founded that became famous in the late ‘90s for a series of “Jazz For…” compilation recordings (Jazz For a Rainy Afternoon, Jazz For The Quiet Time, etc.) that dominated the Billboard Jazz charts and sold well over one million units. His band, The Robert Miller Group, played at many major New York area clubs, graduating to the national festival circuit where they appeared with artists like Bruce Hornsby, Bela Fleck and Kenny Barron.

“The essence of where we are as a group, and where I am personally in my life, is captured in the title track of the album with its upbeat vibe,” says Miller. “It’s a feel good kind of piece with an uplifting melody, funky beat and elements of my jazz fusion background. We’re all about strong melodies and great playing. What excites me most is exciting the listener.”