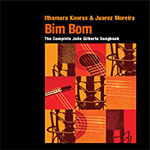 While 2008 marked the “official" 50th anniversary of the bossa nova--a style first recorded in Brazil by guitarist Joao Gilberto on the 1958 song “Chega de Saudade" (No More Blues)--2009 marks yet another key anniversary: the 50th anniversary of the release of Gilberto's genre defining debut LP, also titled Chega de Saudade, with which he widely popularized and in many ways epitomized the emerging bossa style with his distinctive guitar styling, soft, almost whispered vocals and enchanting compositions.

In honor of this great master, Brazilian vocalist Ithamara Koorax, in collaboration with top contemporary Brazilian guitarist Juarez Moreira, has recorded Bim Bom - The Complete Joao Gilberto Songbook, which will be released on Motema Music on October 13th. Although Gilberto has been amply praised as a “legendary vocalist" and as the innovative guitarist who invented bossa nova, his contributions as a composer are often overlooked. With this tribute, Koorax and Moreira make clear that songwriting is indeed a valuable part of Gilberto's legacy.

The CD features, for the first time ever, all of Gilberto's compositions on a single disc. Koorax, who has consistently been named among the Top Female Vocalists in DownBeat's Readers' Poll, is formidable in partnership with Moreira, who is revered as a top Brazilian guitar master, and has worked with such legends as Milton Nascimento, Claudio Roditi, and Toninho Horta. Together they perform twelve tracks, distinguished by a graceful simplicity and a remarkable rapport that showcases both artists while elucidating Gilberto's brilliance as a composer.

The CD is also notable as the second release in Motema's “Jazz Therapy" series, benefitting the Dizzy Gillespie Memorial Fund of Englewood Hospital and Medical Center which partners with The Jazz Foundation of America to provide free medical care and screenings to musicians in need. Jazz Therapy (Volume I): Smile featured duo guitar masters Roni-Ben Hur and Gene Bertoncini, who launched the series in November 2008 to great critical and public acclaim, and sparked a Wall Street Journal feature on Englewood Hospital's extraordinary program.

Bim Bom is the 12th solo release in Ithamara Koorax's remarkable career. Well known in her native Brazil as a jazz-pop singer, she made her American recording debut in 2000 with Serenade in Blue. In the nine years since its release, she has received numerous accolades for her work. “Koorax is delightfully unpredictable in her music... embracing virtuosity, astonishing range, and volcanic vocalese," read DownBeat's review of her 2006 release, Brazilian Butterfly. DownBeat's readers have supported her rise to the top of the magazine's annual Readers' Poll in the “Best Female Vocalist" category: she entered at #10 in 2000, and, most recently, was voted #3 in 2008 (topped only by Diana Krall and Cassandra Wilson).

Bim Bom producer Arnaldo de Souteiro has been a close associate of the reclusive Gilberto since 1979. He produced the tribute with a meticulous eye in regard to tempos and keys, in homage to the composer, while allowing Koorax and Moreira the space to create an intimate, improvisational “live in the studio" performance.

Ample notes that accompany the CD feature interesting comments about each composition. Gilberto has never before published a songbook, so the CD also serves as an excellent resource for guitarists seeking to master his material. “Although some of the songs may seem very simple," explains Moreira, “it's a false impression. They demand a lot of technique. That's the main ingredient of Gilberto's magic: to make very difficult and intricate things seem so easy and sound so natural."

Koorax has her own special relationship with the music. “I don't think of Bim Bom as just one more album in my career," says Koorax. “I have always loved Joao Gilberto, and grew up listening to his recordings."

“Gilberto continues his perpetual evolution to this very day," she adds. “Every time he plays one of the songs that he has been playing for fifty years, he does so by employing new syncopations and new phrasings. Furthermore, everything he plays becomes bossa nova. That is why we can say that the bossa nova is Joao Gilberto, yet Joao Gilberto is bossa nova and much more."