SOURCE: ALL ABOUT JAZZ PUBLICITY
November 10, 2009
Sign in to view read count 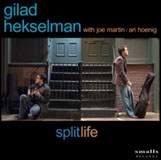 slideshow
Jazz, born out of the diversity and rhythm of American life, is jumping to the beat of Israels mix of cool Mediterranean nights, the hustle and bustle of busy Tel Aviv cafes, and the multi cultural rhythms of a nation where west and east meet. Jazz has been embraced by a new generation of young Israeli musicians and now its gracing the stage for the Philadelphia Israeli Jazz Festival 2009.

For four nights, Chris' Jazz Cafe, in partnership with Consulate General of Israel in Philadelphia, will present the Philadelphia Israeli Jazz Festival 2009, featuring four world-renowned Israeli jazz artists. From November 16-19, with sponsorship from the Jewish Federation of Greater Philadelphia, each night of the Jazz Festival will feature a different ensemble each with its unique style and sound.

Kicking off the Festival, Monday night November 16, will be one of New York's most sought after percussionist, Ziv Ravitz. Ziv's ensembles performance is part of his CD release tour for IMAGES FROM HOME. Born in Beer-Sheva to a family of musicians, he began his professional career playing jazz, rock and avant-garde styles in Tel Aviv clubs. Since coming to the US to expand as a Jazz composer and study at Berklee School of Music, Ziv has been recording and performing his own compositions which reflect his unique sound. Ziv has toured extensively across Europe with groups such as Omer Avital Group, TAQ, Misarah and Lee Konitz Quartet. He has performed with legendary musicians such as Hal Crook, Greg Hopkins, Joe Lovano, Eugene Friesen, Eli Dejibri, James Genus, George Garzone, Ben Monder, and Avishai Cohen. Ziv is currently sign to ENJA as recording artist.

Tuesday night November 17 will feature the gifted guitarist Gilad Hekselman. Born in Israel and a product of the prestigious Thelma Yellin School of the Arts, Gilad came to New York City in 2004 as a recipient of an American Israel Cultural Foundation Scholarship to study at the New York. He quickly has become know as a guitarist of who plays with complex skill and great passion, sharing the stage with notable jazz artists including Anat Cohen, Ari Hoenig, Avishai Cohen, John Scofield, Reuben Rogers, Jeff Ballard and Eric McPhearson. Gilad has played the Blue Note, The Jazz Gallery, Dizzys club, Fat Cat and toured Switzerland, Australia, Japan, Canada, Norway and festivals such as the Montreux JF, Duke Ellington JF, San Francisco JF and Tel Aviv JF. Joining Gilad at Chris' Jazz Cafe will be Joe Martin on Bass and Justin Brown on Drums.

Wednesday night November 19 will highlight the stellar trombonist Rafi Malkiel, called by Chip Deffa of the New York Post one of the best trumpeters of the new generation. Rafi is an active musician in both the Jazz and Latin music scenes of New York City. Rafi has recorded over forty Jazz, Latin, and Rock albums with artists as Ray Anderson, Toto La Momposina, Lauryn Hill and Reggae Master Bers Hammond. He has performed in Broadway musicals including The Color Purple and the Tony Award wining Urinetown. He has played in New York City venues such as Madison Square Garden, Town Hall, Symphony Space, Sweet Basil, SOBs and festivals around the world including the JVC Jazz Festival, Lincoln Center Out Doors, Summer Stage, the Sydney Festival in Australia and the Red Sea International Jazz Festival in Israel. Joining Rafi at Chris' Jazz Cafe will be his quintet featuring flutist Itai Kriss, pianist Jack Glottman, Bassist Panagiotis Andreou and on drums Ziv Ravitz.

Closing the festival, Thursday November 19, will be a Philadelphia favorite flutist Mattan Klein. Born and raised in Jerusalem, this classically trained child protg discovered his ultimate musical expression in jazz. His ensemble Mass UMattan gained acknowledgement in Israel with performances on national TV, radio networks, and festivals such as the Israel Festival and The Israel Museum Jazz Series. Mattan has performed across the United States in such venues as Carnegie Hall, The Kennedy Center for Performing Arts, and The Skirball Cultural Center in Los Angeles. Internationally he has played on stages and in festivals across Canada, Europe, Brazil, and the Far East. His ensemble Seeds of Sun has played in Greater Philadelphia on numerous occasions including at the World Cafe Live. Since returning to Israel, Mattan has ensembles both in his homeland and in the United States. For the Philadelphia Israeli Jazz Festival 2009 he brings his fusion Latin-Israeli ensemble featuring sidemen Yuval Lion on Drums, pianist Manu Koch and bassist Gustavo Amarante.

Israeli Jazz is a musical stew influenced by Western musical genres and beats with a distinctly Middle Eastern rhythm peppered with North African, South American and Far Eastern sounds. The jazz created by these Israeli artists is reflective of the multi cultural world these musicians grew up in. Its a distinctive meeting of West, East, North and South that will be reflected in the artistry of these 4 nights by these 4 artists and their ensembles.- Deborah Baer Mozes, Director of Cultural Affairs, Consulate General of Israel

For reservations and further information: Call Chris' Jazz Cafe at 215-568-3131 or email info@chrisjazzcafe.com.