For this project, I came up with several different musical ideas. Since i am a big fan of music in general, we included influences of many different styles: minimal, drum n' bass, Latin and acoustic. --Pawel Ignatowicz 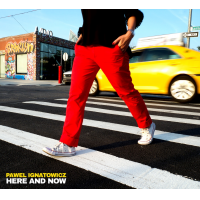 Here and Now (Mother of Invention Records) expresses Pawel's influence from acoustic, electric, drum and bass, Latin, Indian and minimal music. This exciting new CD features Pawel Ignatowicz on both electric guitar and acoustic guitar, guitar synth and electric sitar. The band includes Ferenc Nemeth on drums, Julian Shore on acoustic piano and keyboards, Edward Perez on bass and Jonathan Singer on tabla. The release embodies a fresh and contemporary approach that weaves a variety of acoustic sound through the album's very melodic concept, but still very much remains in the tradition and roots of jazz.

Ignatowicz explains, “For this project, I came up with several different musical ideas. Since i am a big fan of music in general, we included influences of many different styles: minimal, drum n' bass, Latin and acoustic. An important ingredient is the mix by renowned music engineer Dave Darlington. He earned Grammy's for his work on Wayne Shorter's Alegria, Herbie Hancock's Gershwin's World and Brian Lynch and Eddie Palmieri's Simpatico. Darlington also worked on everything from Miles at the Fillmore to Sting's If On A Winter's Night.... The result is absolutely amazing...better than I ever imagined."

“When I was teenager I got John Coltrane's Blue Train, Pawal continues, “that really blew my mind and after that —John Scofield and the Pat Metheny Quartet was the 'cherry on top'. Herbie Hancock, Michael Brecker, Johann Sebastian Bach, Jimi Hendrix, Steve Reich, Stevie Wonder—all of them influenced me—no matter what style- good music is good music."

In New York City, he's performed in many different clubs and venues: The Cutting Room, The Bitter End, Smalls, Smoke, Kosciuszko Foundation and Cleopatra's Needle, to name a few.