Eric’s inclusion of so many different musicians and musical styles makes for one of the best jazz listening experiences you will have in 2021
&#151Dick Metcalf, Contemporary Fusion Reviews 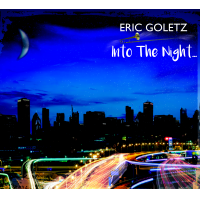 "I hate the word fusion because it makes everyone think of unlistenable types of jazz. In my mind, the word means the blending of different kinds of elements into a particular kind of sound." —Eric Goletz

On his new CD, Into the Night, releasing April 2nd on CAP Records, trombonist and composer Eric Goletz offers a program that mixes funk, rock, and jazz sounds into a unique sonic blend. By featuring his own trombone over a full rhythm section with keyboards, guitar, bass, drums and percussion, Goletz’ music has no artistic parallel in the current jazz scene. While the compositions are intricate, the approach is highly accessible for music lovers of all kinds.

Says Goletz, “Growing up, I was highly influenced by funk and rock, and by the time I moved to New York, funk was very popular. As a composer, I wanted to mix the music I heard on the radio with the spirit of jazz. I also wanted to feature the trombone as the lead instrument in a fusion setting because there wasn’t a lot of that out there.”

Goletz put together a group in 1987-1988 to explore these sounds, but it took him a few years to fully realize the sound he heard in his head. Goletz was friends with an engineer from the legendary Nola Studios in Manhattan and was given access to the studio when it wasn’t otherwise booked. He recorded his groups many times during this period, and he would listen to the tapes at home to decide what was working and what needed development. In the early 1990s, Goletz pitched the recording to several people in the music business, but the edgy nature of his tunes was at odds with the smooth jazz sounds then in vogue. Goletz decided that his other music projects were sufficient to keep him going, so he shelved the idea for a few years.

Goletz continued to work in New York, most notably with pianist Mike Longo’s State of the Art Jazz Ensemble, and with Stan Kenton’s former guitarist Sal Salvador, who invited Goletz to play and write for an album, Lorinda’s Kitchen. However, by the early 2000s, Goletz decided that he could no longer afford to live in Manhattan, and like many other musicians, he moved across the river to New Jersey. In fact, he formed a group called The Jazz Locals, consisting entirely of players who had made the same exodus across the Hudson.

However, Goletz still wanted to develop the concepts he had recorded with his group at the Nola Studios years before. About three years ago, he started waking up with new musical ideas running through his head. Blessed with perfect pitch, Goletz would write down the idea while still in bed. Eventually, he created a new repertoire based on an updated version of his earlier concepts.

Goletz offers, “I’ve had this concept for the best part of 25 years, but as with any concept, it changes and matures with you. I’ve always embraced change and have searched for ways to make new ideas work in my music. After all, that’s the way the industry works.”

In 2019, Goletz decided to try again, with new tunes and a different band. Some of the band members were longtime friends like legendary drummer Steve Johns, while others came to the band through recommendations, including guitarist Henry Heinitsch. The band recorded a session of Goletz’ sketches, and the results encouraged Goletz to flesh out the arrangements and record the album. He started scouting out studios in December 2019 and January 2020, decided to use Sound-on-Sound Recording in Montclair, NJ, and then his recording date was abruptly cancelled due to the COVID-19 pandemic.

Faced with the sudden impact of the lockdown, Goletz tried to maintain a practice regimen at home, but playing alone would not quell his desire to work with his band. Goletz’ partner suggested that he practice outside in the courtyard of his housing complex. That simple suggestion eventually bloomed into a series of concerts for his neighbors, featuring all six members of his band! Goletz and his fellow musicians were able to play and develop their music in front of appreciative audiences listening from the safe havens of their apartment balconies. When Goletz did a second courtyard concert, the entire personnel from the eventual album were present: Goletz (trombone and keys); Mitch Schechter (keys); Heinitsh (guitar); Mark Hagan (bass); Johns (drums) and Joe Mowatt (percussion).

The album was recorded in two sessions, one in August and the other in November. Between the two dates Goletz wrote the remaining tunes and worked on post-production for the album. And while Goletz’ former employer, Mike Longo, succumbed to COVID-19 in 2020, the album was picked up by the Consolidated Artists Publications label, which Longo ran in the final decades of his life.

As a composer, Goletz wanted his pieces to appear in their fully developed state. He would rather have his audience appreciate the exposition and development of the themes in the album’s title track, than worry about a radio-prohibitive track time of 13 minutes. On two tracks, he has added five horns to the band to create a powerful big band sound. Even when approaching established standards like John Coltrane’s “Mr. P.C.” or Cole Porter’s “What is This Thing Called Love,” Goletz finds inventive ways to make the music fit the personality of his band. These incredibly flexible musicians can create perfect grooves in a wide variety of genres, and then can switch those styles on the turn of a dime. They are also masters of dynamics, as displayed in the brilliant composition “Oasis”, which develops as a long crescendo and diminuendo. Goletz has done a masterful job of sequencing the album’s tracks, with the meatier tracks set off by lighter pieces including the melodic “After-Hours” and the Latin-based “Cat on the Corner.” Naturally, this disc offers plenty of examples of Goletz as virtuoso trombonist, starting with the brilliant unaccompanied cadenza that launches the album opener, “Say What??” to the tender notes of the closer, “Lullaby.” The mention of a lullaby reminds us of the late-night origins of this music. If these tunes are indicative of what woke Goletz at night, then his sleep was not lost in vain.

Into the Night is set for release on April 2, 2021 on CAP Records and will be available everywhere.