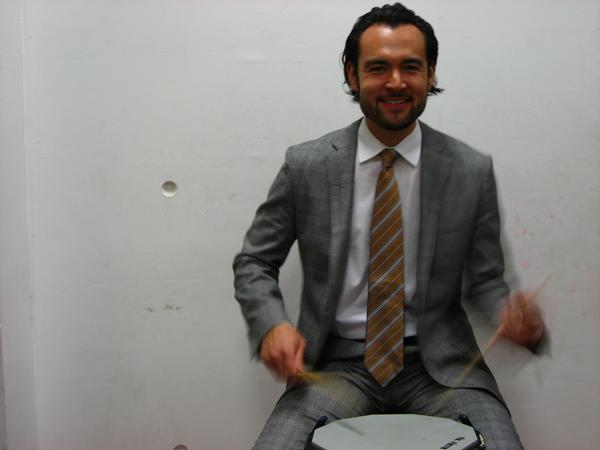 slideshow
For our final concert of the year, Ars Nova Workshop presents a fantastic double-bill with Ideal Bread and Tomas Fujiwara & The Hook- Up. A former student of legendary drummer Alan Dawson, Fujiwara has worked with artists such as Anthony Braxton, William Parker and Vijay Iyer. Fujiwara's quintet The Hook Up – with Brian Settles, Mary Halvorson, Jonathan Finlayson, and Danton Boller—released their first record, Actionspeak, on 482 Music earlier this year. Fresh off the road from several dates with Thirteenth Assembly – Fujiwara’s quartet with Halvorson, Jessica Pavone and Taylor Ho Bynum&#151ANW was able to catch up with Tomas to ask a few questions about Actionspeak and his plans for the New Year.

Has this been a productive year for you?

How did The Hook Up hook up?

I wanted to start performing the music I was writing and I wanted to perform the music in a context where the compositions and band grew together. I was looking for an ensemble that was committed to developing a personal sound and a personal way of communicating and interacting. I didn't want a band that had the “usual suspects" from a particular scene, but one that had to work to find a common ground and voice. I think that that sound in my head led me to subconsciously choose four other musicians who had never played together before.

I've known Brian since my very first gig in New York City. He has always had a personal voice on his instrument, a sense of imagination and creativity that has a strong foundation, and a beautiful sense of space and phrasing. The first few European tours I did were with Danton and, over the years, we've developed a chemistry that only comes from time spent together, both on and off the bandstand. I think the bass-drums telepathy is one of the most important connections in this music, and I feel it most strongly with Danton. He is one of the best bass players out there, musical and supportive in any context, and always down to try something new. I've known Mary for about 7 years. We've played together in nearly a dozen groups and I appreciate that she always sounds like herself. She takes chances and has a seemingly endless arsenal of ideas and sounds. Jonathan and I started playing together in a quartet that would have regular sessions to workshop new compositions. As with all of the musicians in The Hook Up, his sound was the first thing that resonated with me: a clear flow of ideas with a sense of adventure and risk.

What is “Actionspeak” and how does it relate to the seven pieces on the album?

It can be read both as actions speak and action's peak, two concepts that I strive for. Hopefully the music, the action, speaks for itself as well as capturing a peak in our actions. I was also told it has some astrological connection to my birth chart; that it would make sense, from my chart, that I would choose this album title, but I have no idea why!

Nestled within the driving hard bop of the other tunes, with its contemplative, almost underwater and dreamlike mood, “Folly Cove” stands out from the rest of the tracks. Can you talk about this piece?

Folly Cove is in Rockport, MA, a place I've spent some time in over the years. As cliché as this sounds, I heard one of the song's trumpet lines one morning, as soon as I woke up, and wrote most of the piece that day, without an instrument. It's a good example of what I mentioned earlier where the piece and band grew together, influenced each other in shape and approach. Now that we've played it so many times, it takes on subtly different forms each time.

You’ve cited Haruki Murakami as an inspiration for the album. What about his writing motivates your work?

With Murakami, a perfectly plausible story unfolds in the “real world" for 50 pages, and then, all of a sudden, the cat starts talking and we're walking through the sewer asking a fish for directions to the scientist's lab. There's no set up, there's no explanation, it just is the way it is and he makes it work because his world has infinite possibilities. He tells stories in a way that allows for anything to be possible and you can really go on the journey without questioning what's right or wrong, real or imagined. To have that strong of an approach, that strong a structure to what you're doing, that you can pull off any idea and make it work in the flow of the story you are telling, is very inspiring to me. Plus, his imagery is amazing and a strong sense of imagery is something I strive for in my writing and playing.

You’ll be pulling a double shift tonight, opening on drums with Ideal Bread. How has your perspective of Steve Lacy’s music changed since you began performing it?

I had never played Steve Lacy's music before Ideal Bread, so every tune in the book was a new adventure and challenge. I had listened to a fair number of his records, but there have been many new ones that Josh [Sinton] has turned me on to. Josh does a great job of writing charts that include information from all versions of a song, different recordings with different lineups, etc. He'll tell us what Steve told him about particular songs, recordings, approaches, and times in his life. It's definitely made me appreciate Steve Lacy as a great composer, in addition to his playing, and I especially appreciate how his music can be humorous while being very serious and thoughtful at the same time.

Recording a new book of originals with The Hook Up, a third duo album with Taylor Ho Bynum, and a second release from The Thirteenth Assembly. I’ll be touring with those projects as well as Red Baraat, Matana Roberts, Matt Bauder's Day In Pictures, Taylor Ho Bynum Sextet, Positive Catastrophe, and Matt Welch's Blarvuster. And hopefully some other stuff that I don't even know about yet!

Tomas Fujiwara & The Hook Up will be performing on Thursday, December 16 at The Rotunda (4014 Walnut Street) with an opening set by Ideal Bread.