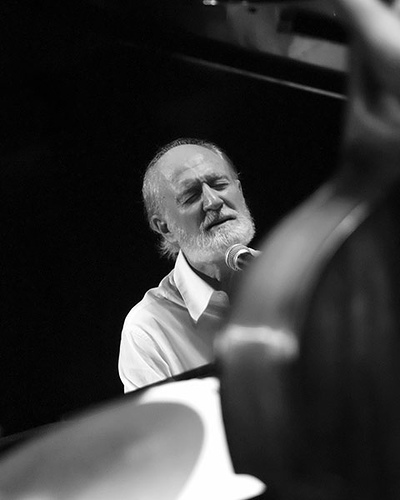 slideshow
Mose Allison sings like he's taking a bath with his clothes on. There's a lovely howling casualness about his vocal style, but what you hear is somewhat deceptive. Within that rural yowl is wisdom and depth, not only in the lyrics of the songs he chooses but also in his piano playing. Mose may initially sound like he just fell off the turnip truck, but he played and recorded with Al Cohn and Zoot Sims, Stan Getz and Gerry Mulligan in the late 1950s before recording as a leader. There's a lot going on there. My profile of Mose ran last week in the Wall Street Journal and can be found here.

When I went to see Mose perform at the Jazz Standard last week, I was surprised that he knew all of his songs by number. He'd quietly say to bassist Ratzo Harris and drummer Tom Whaley “No. 4" or “No. 36." Harris had a book of lead sheets mounted on a music stand. I also was surprised by how syncopated and rhythmic Mose plays today, especially with his left hand. You close your eyes and it's as if a hard-shell crab has mounted the keyboard and is playing with its claws.

Here's Part 1 of my interview with Mose, 82, one of the legendary originators of jazz-folk and a favorite of British rock groups of the 1960s:

JazzWax: Your lyrics and blues are so utterly original. How many songs have you written?
Mose Allison: [Laughs] About 150.

JW: Where were you born?
MA: On my grandfather's farm three miles south of Tippo Mississippi. There were just a couple of general stores there, a gas station and a cotton gin.

JW: You're probably one of the few blues singers around today who actually picked cotton, yes?
MA: My father made sure I learned the value of a dollar at a young age.

JW: How does one pick cotton?
MA: It's been a while, but you have an 11-foot sack. The pod is a seeded thing on a branch and it comes off pretty easy. The trick isn't in the picking but the volume, moving fast and getting a lot in that sack.

JW: Where did you learn to play boogie-woogie piano?
MA: From my cousin's records. My dad didn't like boogie-woogie. He loved stride. He was locked into the Fats Waller thing. I liked Albert Ammons.

JW: Did you take piano lessons?
MA: Yes, starting at age 5. I took lessons for a few years at Miss Etta Oliver's just across the creek. Then I started picking up things off the jukebox, learning to play by ear. So I quit taking lessons. I didn't learn to read music that well anyway.

JW: Where did you play your first public performance?
MA: At Charleston High School in Mississippi. I played Fats Waller's Hold Tight, as a boogie-woogie. But I didn't win.

JW: Who did?
MA: The guy who played Washington and Lee Swing on the fiddle [laughs].

JW: What did you do after high school?
MA: I attended the University of Mississippi for a couple of semesters. Then I joined the Army in 1946 with two friends. I was going to be drafted anyhow. I went into the infantry. I was going to be shipped abroad, so we were sent to Seattle by troop train. My duffel bag was all packed and ready. But then Congress passed a law that said a soldier couldn't be sent overseas if he had less than 10 weeks of basic training. I had less than that. I was discharged in 1947.

JW: What did you do after you got out?
MA: I went back to Ole Miss. I was studying mechanical drawing and chemical engineering. But I didn't last long. Analytical geometry stumped me pretty good [laughs].

JW: What did you do?
MA: I left Ole Miss and went on the road, playing trumpet with a couple of friends.

JW: Did you make it to Memphis?
MA: Yes. Before I left Ole Miss, I headed up there. I knew Bill Harvey, B.B. King's first musical director. He got me to sit in with the band that warmed up the audience before B.B. came on stage. In Memphis, I met black players and white players. I used to go to jam sessions.

JW: What did you do after leaving college in 1951?
MA: I went up to New York to have a look at New York University and check out the jazz scene. NYU was so different than the schools down South. For one, there was no campus there. The college was all buildings. There was no portico, no lawns, no trees. As for jazz, no one was working at the time. So I went home.

JW: Who was your biggest singing and composing inspiration at this point?
MA: I had heard Charles Brown, Muddy Waters and so forth. I also loved Nat King Cole.

JW: Then what happened?
MA: I met my wife and got married. She urged me to resume my studies so I enrolled at Louisiana State University. I took courses in esthetics. That's what opened me up. I had a book called Principles of Art by R.G. Collingwood. It opened my eyes to the fact that some of the stuff that I had been listening to all my life was actually art.

JW: Your trumpet was stolen in a Philadelphia nightclub?
MA: Yes, an old, lacquer one. I liked it a lot. But after it was stolen, I never bothered to get a new one. My decision to concentrate on the piano instead was economic and esthetic [laughs].

JW: By 1956, you had begun to record.
MA: Yes, with Al Cohn and Bob Brookmeyer. Then I started writing the Back Country Suite. I knew how to write music. I could write single lines and things, and could make charts. Later, I arranged an album for Columbia Records called Hello There, Universe in 1969.

JW: Back in 1956, how did you start working with Al Cohn?
MA: That's a funny story. I met Marilyn Moore, Al's wife at the time, in Galveston, Texas, in 1955. I was working a gig down there with a girl singer. Al's wife was there on vacation. She heard me and liked what she heard. She said that if I ever came to New York that I should get in touch with Al. So when I moved up with my wife and young daughter in 1956, I did.

JW: What happened?
MA: I contacted Al, and he had me right out to his house in Flushing, Queens. He gave me some pointers on how to write. I was finally a New Yorker. My wife and I and our daughter moved into an apartment on 103rd St., right off Central Park.

Tomorrow, Mose talks about making a name for himself in New York and his tours of Great Britain.

JazzWax tracks: Mose's superb early works are on Prestige. His excellent leadership dates for the label include Back Country Suite (1957), Local Color (1957), Young Man Mose (1958), Ramblin' with Mose (1958), Creek Bank (1958) and Autumn Song (1959). You can sample these at iTunes or by clicking on the links above to Amazon. If you're looking for a Mose starter, go with Creek Bank. For a mind-blower, dig what he does with Cabin in the Sky.

JazzWax clip: Here's one of my favorites by Mose, Willie Dixon's The Seventh Son, off of Creek Bank. Caution, Mose gets mighty addictive fast...