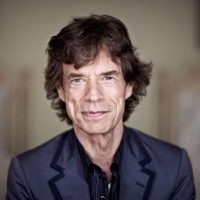 Last Tuesday, I interviewed the Rolling Stones' Mick Jagger for my “Anatomy of a Song" column in the Arena section of this Friday's Wall Street Journal (go here). As readers of JazzWax know, my “Anatomy" column takes a deep dive into how an iconic song was written and recorded through interviews with the song's primary writers and recording artists. The song this time around was Moonlight Mile, an unusual ballad that Mick wrote alone and was recorded in October 1970 and January '71 by the Rolling Stones for their Sticky Fingers album.

One doesn't often think of Mick Jagger as lonely, staring out the window of a train at night and wishing he was home. Quite the opposite. But back in the summer of 1970, during the Stones' European tour, the band faced tough, unruly crowds at nearly ever stop. The Stones had appeared at Altamont Raceway Park back in December, where its brand was tarnished when the Hells Angels were used as security for crowd control, raising the level of friction in the front rows of the concert. When concert-goer Meredith Hunter tried to rush the stage with a gun, he was stabbed and killed by the Angels. You can watch it all in the documentary Gimme Shelter, which I wrote about in 2010 (go here).

In the months following Altamont, the Stones were dragged through the mud by the media for amping up tensions between the inebriated Hells Angels and crowds of acid-tripping hippies. However, a careful viewing of Gimme Shelter shows that the Stones were simply performing as they had done at previous concerts and were pretty rattled by what was going on in front of them not to mention helpless to do much of anything about it.

That summer in Europe, there were crowd incidents at nearly each stop, either because the post-Altamont Stones were attracting a new, ruffian class of male concert-goer or because the American experience had set a bad example. Either way, the events were a downer for Mick, who longed to be back safely at Stargroves, his country estate outside London. As the band's frontman, he feared for his safety given the lax security back then and he worried that the Stones were being unfairly tarred as thug-enablers. [Photo above, the Rolling Stones on tour in 1970]

Traveling from city to city by train that summer, often at night, Mick had plenty of time to think. It was during this period that he first began to write Moonlight Mile, one of the least known Rolling Stones songs and one of their most interesting ballads. For one, it's not a blues. For another, there are no Keith Richards power chords or bold riffs, which makes the song different. And finally, it's highly textured and eclectic—beginning in an Asian mode, shifting to a Native American tom-tom beat and winding up with psychedelic, Indian motifs.

For me, Moonlight Mile is Mick's Body and Soul. However, instead of pining for a lover, he misses his own bed. When the band wrapped the tour in mid-October, members of the band were at Stargroves when Mick finished doodling with the lyrics. Then Mick, guitarist Mick Taylor and drummer Charlie Watts began to invent the song on the fly with fascinating results, which lead them to record the basic track from midnight to 6 a.m. Later, in January, Taylor overdubbed more guitar tracks, Keith added his guitar, Bill Wyman added bass, Jimmy price added piano and Paul Buckmaster added strings, which Mick wanted to build the song to a crescendo. If the strings have an Elton John feel, it's because Buckmaster provided strings on many of John's albums.

Interviewing Mick was a thrill, but only partly because he's Mick Jagger. More fascinating for me was getting to the real Mick Jagger—the poet, the vulnerable artist and the visionary. He was candid throughout. Have a read and see what you think.

JazzWax clip: Here's the studio version of Moonlight Mile from Sticky Fingers (1971). Listen how it keeps shifting stylistically and building, and dig the animated, sparkly place it winds up...