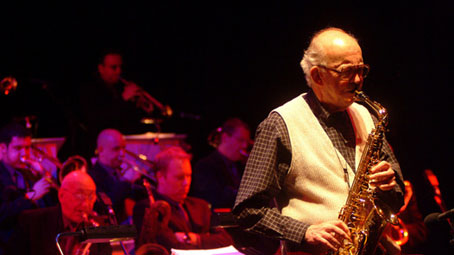 Growing up in Los Angeles in the mid-1940s, alto saxophonist Lennie Niehaus found himself rubbing elbows with other hungry young talented jazz musicians. In college in Los Angeles, Lennie studied composition with the West Coast's brightest and most advanced classical teachers and theorists. Everything was falling into place. When Stan Kenton called in late 1951 and asked him to audition, Lennie couldn't believe his good fortune. He had worked hard practicing, studying diligently and arranging in anticipation of just such an opportunity. Then just a few short months after joining Kenton's band, Lennie's draft notice arrived.

In Part 2 of my interview series with Lennie, the alto saxophonist, composer and arranger talks about attending music school, replacing Art Pepper in Stan Kenton's band, being inducted into the army, meeting Clint Eastwood in basic training, and the jukebox song he heard on furlough that knocked him out:

JazzWax: In high school, did you arrange for any other bands besides Phil Carreon's?
Lennie Niehaus: No. I was still a kid. But I did have ambition. One day I took my arrangement of Lover Man down to Billy Berg's where Dizzy Gillespie's band was rehearsing. I had planned to go up to him and tell him about my arrangement but I chickened out. I was afraid I would put the parts down on the stands and the musicians would say, “What are all these 16th notes?" We played the arrangement with Phil's band, though, and it sounded great.

JW: When did you graduate high school?
LN: I skipped a grade in high school and graduated in 1946. I had just turned 17 years old and started college right after graduation. World War II had just ended, and a lot of the vets were studying on the G.I. Bill. In classes, they'd give me looks like, “What's this kid doing in college?" [laughs] The classes were made up mostly of 25-year-old guys. It was good for me. I grew up fast.

JW: Where did you go to college?
LN: First I went to Los Angeles City College and then Los Angeles State College music school. I majored in composition. I had very good teachers, including Leonard Stein, who was an authority on Arnold Schoenberg and became director of the Schoenberg Institute at USC. I was studying classical and playing jazz in a band off-campus. That band had some great players: [pianist] Dodo Marmarosa, [guitarist] Tony Rizzi and others.

JW: How did you wind up joining Stan Kenton's band in 1951?
LN: When I was 22, Stan [Kenton] called me and said, “Art Pepper is leaving the band. We've tried several guys but we haven't found someone with the right sound." Stan said he was looking for a jazz alto player. That's the second alto, the chair that takes the solos. He said he was auditioning at the Florentine Gardens in L.A. and asked me to come down. The date we set also happened to be the same day I had to go take my physical for the army. Up until that point, my years in college had kept me out of the draft. [Photo of Art Pepper with Stan Kenton's band by Bob Willoughby]

JW: How did you do?
LN: I went down to the Florentine Gardens [pictured] at 11 a.m. The first tune Stan called was Gerry Mulligan's Limelight. I was in the second alto chair, reading the jazz chart. Here comes the end of the chorus and the first solo is me. So I play it, and Stan liked my sound. We tried a couple of other things, like Deep Purple. Stan asked me to read the first alto part to see how I'd do on that. After we finished, Stan and I sat down, and he said, “Lennie, I like the way you play. Want you to play in my band?"

JW: What was going through your mind?
LN: I was thrilled. I looked at Stan and remember saying to myself, “Jesus, this guy is old." He was 39 at the time [laughs]. Which was exciting and intimidating for someone who's just starting out. To Stan's credit, he didn't want to sound like Woody Herman or Count Basie or anyone else. Which is why he'd constantly change the band's sound. When I joined the band, Stan had begun to shift away from the jazz-classical approach he was exploring with his Innovations Orchestra and going with the kind of swinging music that a lot of the guys in the band wanted to play.

JW: What did Stan tell you?
LN: He said the band was going on the road. He asked me to play second alto. Bud Shank was playing first alto. Soon after I got the job, Bud left and Dick Meldonian was hired to play first alto. In April 1952, several months after I began with Stan, we were playing in Boston when I got my draft notice. I told Stan, and he said, “That's a shame, you were just getting started." I said to myself, “This is the end of my career." [Photo: Lennie Niehaus soloing at the Club Oasis in Los Angeles with Stan Kenton's band in February 1952]

JW: What happened in the army?
LN: I did my basic training on the West Coast and met Clint Eastwood there. He was in the same training camp. Basic was supposed to last 16 weeks--8 weeks of training and, if you made it through, you spent another 8 weeks learning how to shoot a gun.

JW: This was in the middle of the Korean War.
LN: Yes. After the first eight weeks, I realized I knew several guys in the army band. I went over to say hi. I wanted to get into the band. A friend said the band needed an oboe player. Oboe players were very difficult to find. So I auditioned and got the position. We played parades in San Jose and Monterey. I rehearsed with the band in the morning and practiced in the afternoon.

JW: Did you play anything other than parades?
LN: Yes, we played transcriptions of classical pieces and recorded them once a week for airing on the radio on Saturday mornings. We also played and marched around the field on Saturday mornings, and the general would come forward and give out medals for different reasons. We even were in a competition of marching bands.

JW: How did you do?
LN: The bandleader asked me to write a marching band composition. So I did. We didn't win first prize but I won second prize. It was called the Infantry Blue. It was like a John Philip Sousa march.

JW: Were you looking forward to returning to Kenton's band?
LN: Yes, very much so, if there was a spot open. The first arrangement I wrote for Stan before I went into the army was Pennies From Heaven. I also wrote a couple for Stan's singer at the time, Jerri Winters [pictured, left, with Kenton], including What a Difference a Day Makes. One day in 1953 I was on a furlough and came down to Los Angeles. I was sitting in a restaurant in Malibu with my wife, who wasn't my wife yet, having a hamburger. The place had an old jukebox. All of sudden I heard my arrangement of Pennies From Heaven. Sure enough, Stan had put it out as a single. The first arrangement I wrote for Stan, and the band had recorded it. I was floored.

Tomorrow, Lennie talks about rejoining Stan Kenton's band in 1954, why contrapuntal jazz flourished on the West Coast, life on the road with Kenton's band, and arranging The Stage Door Swings for Kenton.

JazzWax tracks: Lennie's arrangement of Pennies From Heaven was recorded by Stan Kenton in January 28, 1953, while Lennie was in the army. The track can be found as a download at iTunes or Amazon on Kenton's Sketches on Standards album. What's fabulous about this chart is how Lennie has the trombone section playing off the saxophones. He treats both as self-contained units, using tight voicings so each section sounds like a single instrument.

JazzWax clip: Here's a taste of Lennie's score for Clint Eastwood's The Rookie (1980). Dig how Lennie uses bass trombones, a baritone sax and an electric bass to get a funky foundation while Latin percussion and a trombone work the top end. And dig the crazy sax soli about halfway in...