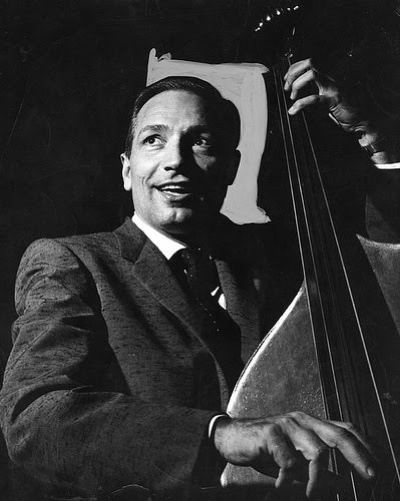 slideshow
Southern California in the early 1950s was a place of rapid transition. As cars became more affordable and local highways improved, teens in the warmer months gravitated toward the shore. At the Lighthouse in Hermosa Beach, manager Howard Rumsey found himself in the right place at the right time. With nighttime demographics skewing younger and suburban populations expanding, a new form of jazz emerged. On car radios and 10-inch LPs, the new jazz was in keeping with the Pacific Coast's rhythmic surf and long sunsets. The music was both pretty and aggressive, and the Lighthouse was ground zero for everything that emerged on the frantic cool scene. [Photo of Howard Rumsey in the 1970s by Paul Slaughter]

But the Lighthouse was more than your average West Coast jazz club. For one, Howard wasn't a peacock manager who walked the floor clutching a cigar. Nor did he sweat over cash-register receipts. He just attracted the best players he could find and did what he loved most--playing the bass. Almost overnight, the club became a mecca for passionate musicians and hip audiences. And based on the photos taken of Howard during this period, it's clear that this was a dream job, leaving him wondering why someone was even paying him to have so much fun.

In Part 3 of my interview series with Howard, the legendary bass player and Lighthouse All Star-in-chief talks about how California's 15% club tax changed the configuration of jazz groups, how he targeted the college market, the two musicians who had the biggest influence on the rise of West Coast jazz, his later club Concerts by the Sea and his simple secret for running a successful club:

JazzWax: How would you describe West Coast jazz?
Howard Rumsey: It had a different sound. It wasn't cool,  like most people think. It was between cool and bop. As Shelly Manne said, the only difference was we were at the Lighthouse and other guys were in Chicago and New York [laughs].

JW: But how would you describe it?
HR: It's the music of happy--in a hurry.

JW: Was Lighthouse owner John Levine happy?
HR: He was beside himself. Because he was making money. Starting in World War II, there was a 15% state tax in California on entertainment that featured singing or was for dancing. Customers saw the extra hit in their bills, and clubs passed it along to the state. But instrumental music was not taxed. That tax remained in force until the 1980s.

JW: What affect did this have on the club scene?
HR: Well, instrumentalists became more in demand by   clubs that wanted to hold down costs. A couple of horns and a trio weren't as expensive for audiences.

JW: Yet the pressure was on these instrumental groups to be dynamic.
HR: That's right. Small groups had to be more and more entertaining to bring audiences in. That's why there was no singing at the Lighthouse or with the All Stars--and could never be in the club, legally. Occasionally a girl singer would come in and do a couple of tunes, and we got away with that.

JW: What was Southern California like when you first started as manager of the Lighthouse in 1948?
HR: With the war over, the ports were booming, communities were spreading out, everyone was driving cars, factories were opening. There was a lot going on.

JW: How did you come up with the “All Stars" name?
HR: It just fit on a sign that Levine put up across the top of the club [laughs].

JW: Who was the primary audience for the music at the Lighthouse?
HR: College kids. The way I spread the word was to hold concerts at all the Southern California colleges. We wound up connecting with younger audiences and older guys who were in college on the G.I. Bill.

JW: What did you do?
HR: I took the All Stars out to these places so locals could see them. Also, a lot of young people from the Hermosa Beach area came. Back in the 1930s, locals had danced at the ballrooms. When they had children, those kids in the 1950s came to the Lighthouse. You have to understand, back then everyone grew up listening to jazz--parents and teens. It was all very natural. But initially the local police were leery of the whole thing.

JW: Why?
HR: With all the cars parking in the lot, they weren't quite sure what was going on and why the Lighthouse was so popular all the time. So to calm everyone down and put everyone at ease, I'd put the Lighthouse musicians in local parades. Once the community and police got to see them and know them, everyone settled down.

JW: Did the college audience change the type of music that was played at the Lighthouse in the early 1950s?
HR: When the college kids came in, they wanted a new sound, and we responded to their excitement. I was out at El Camino College several times with the All Stars playing one-hour concerts. I played eight to nine schools every semester. I built up a clientele that way. I loved to play and groove. We even played high schools.

JW: Did you know Gerry Mulligan when he came to town in 1952?
HR: All I knew that he was a guy who was intent. He knew what he wanted to play and knew how to play it. Then he found Chet Baker. And they formed a group. They played at The Haig [the Los Angeles club] for a while. Then he went away to New York. When he came back to L.A., Judy Holliday was with him. She had a motion picture to do, so Gerry was right there with her.

JW: Who was most responsible for West Coast jazz?
HR: It was a combination of Gerry Mulligan and Shorty Rogers. They changed the whole scene. They get the big medals. Mulligan was a friend of Gil Evans. Gil was originally from Newport Beach and had a band at the Rendezvous Ballroom. Then he started writing arrangements for Claude Thornhill. Mulligan had a whole new cool sound, and when he came out to L.A., he brought cool with him. He and Chet capitalized on that and sold it. Shorty was a monster arranger, constantly inventing. And tireless. And everywhere back then.

JW: What was at the heart of the West Coast sound?
HR: The gimmick was not to put too much emphasis on the after-beat. Mulligan had such a great sound. So did Shorty. They had to keep the action going. So they kept talking to each other harmonically with lines.

JW: You and the All Stars recorded 12 albums. Which one stands out for you and why?
HR: My favorite is In the Solo Spotlight. We recorded three on there with Lennie Niehaus that led to a 16-piece band that we put together to play the homecoming at UCLA. That was something I had always wanted to do. [Igor] Stravinsky had played there 10 years earlier.

JW: In 1971, you started Concerts by the Sea, a club in Redondo Beach.
HR: Yes, after John Levine died in 1970, I stayed at the Lighthouse for a year. But by then, John's son wanted to turn the Lighthouse into a blues club, and I wanted to try something new. An opportunity came up down in Redondo Beach. Stan Kenton's brother-in-law was the city manager, and the town had just put in a new horseshoe-shaped pier. My club was on one end, and a restaurant was on the other.

JW: After 15 years, you closed down. Why?
HR: I no longer understood the music. Musicians showed up with tons of equipment and wires--so much that in the end we had to put in heavy lumber just to get the stuff in. And then getting it out was even harder. The music was changing, and I was worn out.

JW: Looking back, was your jazz life fun? You look so happy in pictures.
HR: Oh yeah. The best fun of all times. I had a great time. It's hard to believe how good it was.

JW: So, what's the secret of running a successful jazz club?
HR: Have the musicians start on time [laughs]. If a guy drives 20 miles to be there and wants to hear music at 9 o'clock, you owe it to him to start on time. If you do that, the guy will be back. With friends.

JazzWax tracks: The Lighthouse All Star albums all feature clean, smart music. Most have the ambient sound of audiences in the background. Three solid All Stars albums are Howard Rumsey's Lighthouse All Stars Vol. 3 from 1953 (with the fabulous Out of Somewhere), Lighthouse All Stars with Oboe and Flute (1954), and Lighthouse at Laguna (1955). And let's give Howard his due. On each album, his bass can be heard loud and clear strumming away hard and clean. For too long Howard's musical contribution has been overlooked. By any definition, he was a smart, strong, supportive player who brought enormous soul to everything he played. Dig his time-keeping up against the drummer's brushes on the Oboe and Flute album. Smooth as silk, and absolutely on the money.