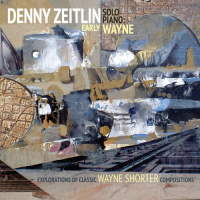 slideshow
This week, San Francisco pianist Denny Zeitlin will make one of his rare appearances in New York. Starting Wednesday, April 19, and running through Saturday, April 22, Denny will be at the Mezzrow Jazz Club at 163 W. 10th St. On the first two nights, he'll play solo. On the second two nights he'll be accompanied by Buster Williams (b) and Matt Wilson (d). Sets on all four nights start at 8 and 9:30 p.m. If you're out of town, there's live streaming here. For more information and reservations, call (646) 476-4346.

Recently, I caught up with Denny...

JazzWax: Many people are unaware that your first recording was in 1963 and that Bill Evans was an early supporter. He also recorded your composition, “Quiet Now," many times. What do you remember about your interactions with him?

Denny Zeitlin: That 1963 project was Jeremy Steig's Flute Fever, where I was the featured pianist. Bill Evans called my playing on the album “great" in a Downbeat Blindfold Test, so I felt emboldened to contact him after I finished my first trio LP for Columbia, Cathexis, in 1964. I was hoping for a critique and his perspective on the music scene. Bill was warm and welcoming, listened carefully to the whole album, and was extremely positive about the music. His only suggestion was to keep doing my thing and to never let anyone tell me what to play. Getting this feedback at age 26 from someone I admired and respected was very important for me. Over the years we would touch base when I had the chance to hear his trio, and his encouragement and generosity of spirit was something I treasured. I also was amazed that he felt such a connection to Quiet Now that he recorded it at least eight times and kept it in his nightly repertoire for 15 years.

JW: As you think back on Quiet Now, what was your inspiration?

DZ: I composed Quite Now in college, when I was 18 or 19. I can't recall a specific event that inspired it. I do know that it felt like a requiem, and was full of yearning and loss.

JW: You're in the process of posting videos on YouTube of Zeitlin Meets Monk, a recent solo piano concert focusing on his compositions.  What drew you to his work, and what do you feel hasn't been said yet given the many tributes that have preceded yours?

DZ: I've loved Monk since I first heard him back in 1952 when I entered high school. His pure originality was astounding, yet no matter how quirky his tunes or playing might seem, there was always an uncanny internal logic operating. His passion and risk-taking inspired me, and his compositions were wonderful springboards into improvisation. I feel like we are kindred spirits, and that my explorations of his compositions both honor his genius, and take the music to some new places.

JW: Did you ever even meet Monk? If so, what did he think of your piano approach?

DZ: I describe my one and only meeting with Monk in the first Zeitlin Meets Monk YouTube video. Very briefly, I was introduced to Monk at a jazz club by his drummer Ben Riley in 1964. I delivered a series of lame compliments while Monk stared into space. Then he suddenly turned and exclaimed “Ben Riley!!" and pointed to Ben who had gone to the bar. I knew my audience, such as it was, had come to an end, and I went over the bar. About a year later, I did manage some kind of connection with him when he loved a track from one of my albums in a “Downbeat Blindfold Test."

DZ: In some ways, my most formative years were 1952-60 in high school in the Chicago area, and then at the University of Illinois where I would frequently return to Chicago for gigs and jam sessions. In 1960 I began four years of medical school at Johns Hopkins in Baltimore, which was very demanding academically. I did find time to sit in frequently with Gary Bartz and his group at Baltimore's North End Lounge, which helped to continue developing my music. I made my first two recordings for Columbia in New York during that period, but I was never part of the New York scene.

JW: You're going to be appearing at Mezzrow in New York April 19-22. How is the trio and solo formats different for you?

DZ: There's something special about being alone at the piano, with the opportunity and challenge to be solely responsible for the music, which can go absolutely anywhere from moment to moment. And I love being part of the equilateral triangle of a trio with superb players like Buster Williams and Matt Wilson, where a merger occurs and a true group music is created.

JW: Sunnyside Records recently released your Early Wayne tribute to Wayne Shorter. And you're currently sharing your Zeitlin Meets Monk videos. Are there other tribute projects in the works? Would you ever consider a focus on Bill Evans?

DZ: It's only in the last few years that I've been drawn to the idea of concerts focused solely on the work of one composer. “Remembering Miles" was the theme of a solo concert last December, and I hope it will eventually be released on CD.  And in December, the focus will be on Billy Strayhorn. There are a number of other composers I'd enjoy exploring, including Bill Evans.