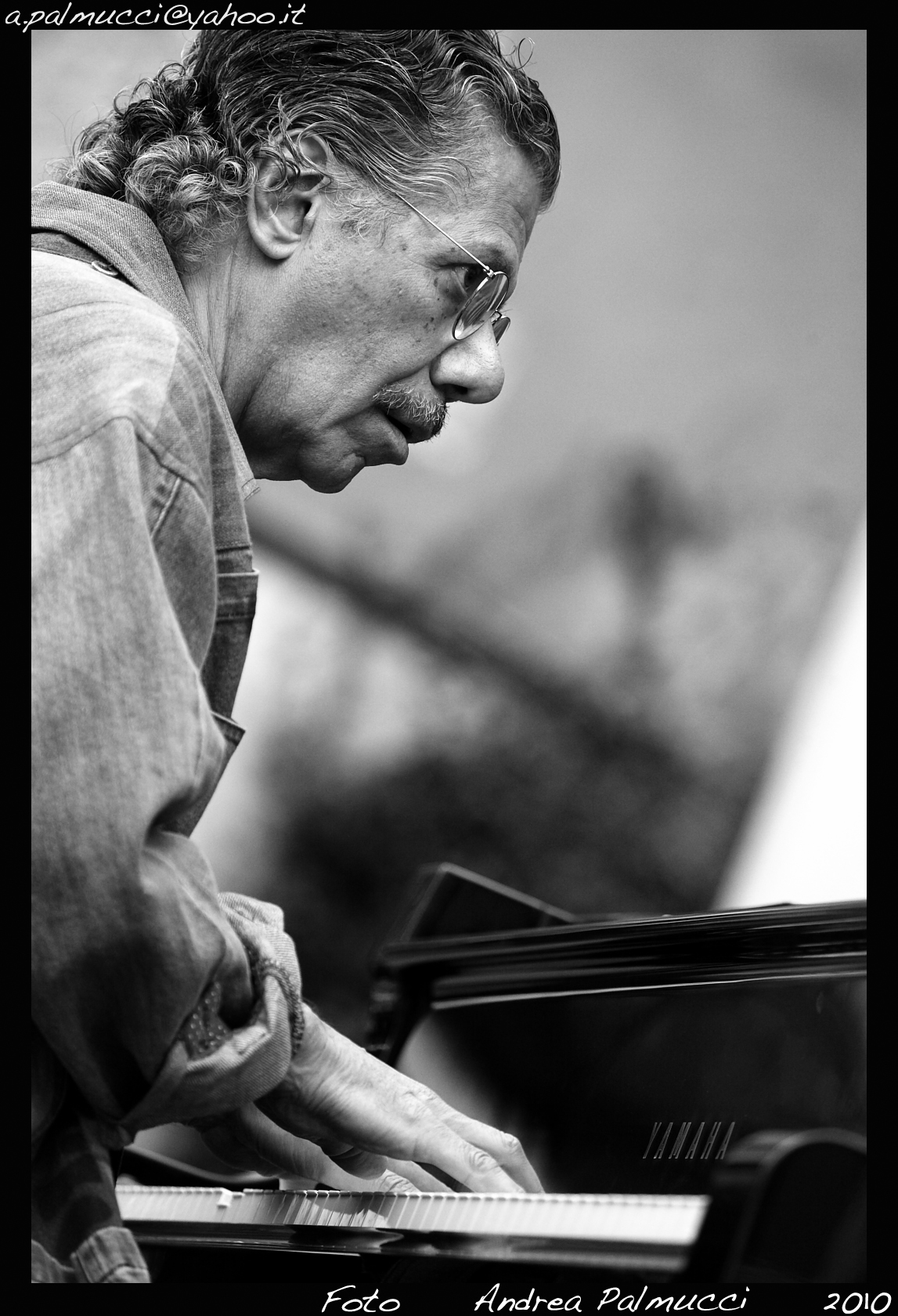 slideshow
When acoustic jazz began to fall on hard times in the 1970s and early 1980s, many fans blamed Chick Corea. After years spent pioneering a successful form of psychedelic jazz-rock fusion with his group Return to Forever, Chick became a lightning rod of sorts for complaints and dismay. Disgruntled jazz fans blamed Chick as well as Weather Report, John McLaughlin's Mahavishnu Orchestra, Larry Coryell's Eleventh House, Steps and other fusion bands for severely damaging acoustic jazz's influence and stealing away a generation of listeners. Interestingly, much of that resentment lingers today. [Pictured at top: Return to Forever in 2008; clockwise from left: Chick Corea, Lenny White, Al Di Meola and Stanley Clarke]

The truth, of course, is a bit different. Jazz fell on hard times because a younger generation of listeners found the mass allure of rock and soul more exciting and in sync with their self-image and drive. To be fair, jazz had grown increasingly difficult to understand for the average listener and seemed reserved for those with in-depth musical knowledge and a more spiritual esthetic. Volume, stagecraft, lighting and the electric guitar all were standard fare by the early '70s, and acoustic jazz simply couldn't compete on a large scale.

This three-part interview gives Chick a chance to air his side of the story, allowing us to learn how jazz-fusion emerged in several waves in the late '60s and early '70s and to have a finer appreciation of a form of jazz that you may have overlooked, dismissed or never had a chance to appreciate.

Here's Part 2 of my conversation with Chick, who is appearing at New York's Blue Note with a range of jazz artists through Nov. 27.

JazzWax: Is part of jazz-fusion's surge a desire by musicians to relate to younger audiences using electric instruments and volume?

Chick Corea: Yeah, that's part of it. My opinion, generally, is that all music lacks value and humanity and feeling and depth when it's devoid of an audience. I mean, if you think of me sitting in my room playing music just for myself, I mean there's nothing wrong with that, it's a great activity. But in terms of music as a culture and a society, you have to take changes in audiences into account.

JW: Is that what you did with your form of jazz-fusion?

CC: I've found that musicians always want to communicate. You don't want to not communicate, right? You want to get something across. But you can't just do what interests only you. My own personal tastes in music would turn everyone off. It would probably turn you off. So back then, I differentiated my own personal tastes in music from my attempt to bring my love of music to audiences that were looking for a new relationship with it, a new sound.

JW: Is stage excitement and lights part of the movement as well?

CC: I don't know. I have seen performances by musician on a single acoustic instrument that made audiences rock. I've seen Bobby McFerrin go out with nothing but his voice and excite an audience. I really think the mechanics of a stage or an instrument—whether it's electric or not—is far less important than the artist and what he's doing and his intention and how he delivers things, you know? There tends to be an agreement that pop and rock share certain things, like a beat and an excitement and so forth. It's like an agreed-upon thing. But for me and the musicians I've worked with, I've always worked outside that box.

JW: Was hard rock influencing you in the early '70s?

CC: A little bit. But the first rock group that really got to me was John McLaughlin's Mahavishnu Orchestra [laughs]. I considered that a rock group when I heard them in 1973, there was that audience, and it definitely wasn't a Village Vanguard audience. There were long-haired kids with that vibe lighting matches in support of what was going on. To me that was rock 'n' roll, but on jazz's level of intensity.

JW: Anyone else influence you?

CC: Stevie Wonder. His music I really loved, and it reached me on a lot of different levels, not just as pop or soul. His music had a deep message for me from an artist standpoint,and the writing was beautiful. The spiritual side was amazing. Stevie is really a musician beyond category. I also listened to Joni Mitchell in the late '60s. I thought she was a really creative lady in the way she made her music. She was delicate with the form of her music. Her music  didn't have a lot of force in it, but it had a great groove and a great message.

JW: Did you thrive on large audiences?

CC: I got a kick out of every kind of audience, not just large ones. For instance, my last tour earlier this year with Returnto Forever IV—with Stanley Clarke, Lenny White, Jean-Luc Ponty and Frank Gambale—we put a set together that went through a lot of different tones but mostly was pretty forceful on the rhythm end. We ended up almost every night with Stanley's School Days, from 1976, which got people on their feet rocking real hard. It was just a lot of fun.

JW: How does that compare with an acoustic group?

CC: When I played the Blue Note earlier this year with Paul Motian and Eddie Gomez for two weeks, the audience was sitting and listening intently. They were enthusiastic and clapped really nicely, but it was a different vibe, but I enjoyed that as well. The two are different.

JW: Do you think you were influencing rock in the early '70s?

CC: Probably. Rock didn't exist in a vacuum and neither did jazz. Good musicians listen to a range of styles, for enjoyment and to find new ideas. I think we rubbed off on rock as their game improved. Musicians put on other artists' records and either they heard something special or they didn't. They didn't choose what they put on based on what section of the store it was purchased in.

JW: So musicians of your generation back then didn't see themselves as distinctly jazz or rock?

CC: No. Musicians generally felt they were part of a group, a club. We were all people who are trying to save the planet, and it's the same way today. Musicians are open and there has always been an exchange program between rock and jazz, as quietly as it's kept. That's the way musician actually operate. We listen to each other a lot, and we did that a great deal back then.

JazzWax tracks: A solid remastered compilation of Return to Forever's music in the '70s is The Anthology (Concord), which was released in 2008. You'll find it here.

To hear where Chick Corea was coming from just before forming Return to Forever in late 1972, give these albums a listen, featuring Chick as a sideman:

And here's Chick with Stan Getz at Montreux in 1972. Stan seems a bit baffled by the new music, relying on bossa nova lines as Chick, Stanley Clarke and Tony Williams invent a new form of jazz-fusion...